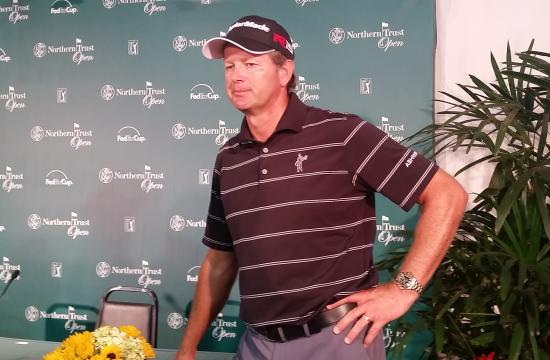 The 46-year-old Goosen began Saturday’s third round with a one-shot lead over DeLaet and two other golfers, then shot a two-under-par 69 as he continued pursuing his first victory on the PGA Tour since the 2009 Valspar Championship.

The tournament may not have a winner today as there is a 40 percent chance of rain in the morning, increasing to a 60 percent chance in the afternoon, according to the National Weather Service, putting completion of the final round before darkness at risk.

Because of the weather, “the course will play different than it played the last three days,” Goosen said.

“Strategy will pretty much stay the same, pending conditions,” Goosen said. “I’ll just stick to my game plan, try and hit fairways, try and hit greens and make pars. If you get a birdie, it’s a bonus.”

Sang-Moon Bae of South Korea, rookie Carlos Ortiz of Mexico and Sergio Garcia of Spain are tied for third, three shots behind Goosen at five-under-par for the tournament.

Goosen birdied the first, sixth and eighth holes Saturday, increasing his lead to three shots. He began a stretch of four bogeys in six holes on the 10th. He had a birdie on the 11th, but bogies on 12, 13th and 15th holes.

Goosen had back-to-back birdies on the 16th and 17th holes and completed his round by tapping in a five-inch putt for a par on the 18th hole.

Goosen said he was “very happy” with his round.

“The front nine was really putting, a lot of good recovery putts I made,” said Goosen, who is at eight-under-par.

“The back nine it caught up with me a little bit. I didn’t hit the ball that great, especially my driver, and hit myself in a few bad places, but I still made some good putts.”

This is the eighth time Goosen has played in the Northern Trust Open. His best finish was a tie for 12th in 2011.

DeLaet shot a one-under-par 70. He eagled the first hole, birdied the sixth and had back-to-back bogeys on the seventh and eighth, finishing the front nine at one-under-par.

“I’m happy shooting under par,” said the 34-year-old DeLaet, who is seeking his first victory on the PGA Tour. He finished second in The Barclays in 2013 and the Farmers Insurance Open and Waste Management Phoenix Open last year.

“It’s a tough golf course. It’s just so demanding and tests your patience.”

Bae shot a five-under-par 66, tying for the day’s low round with Morgan Hoffman. Bae had the day’s lone bogey-free round and second of the tournament. Brendon Todd had a bogey-free two-under-par 69 in Thursday’s first round.