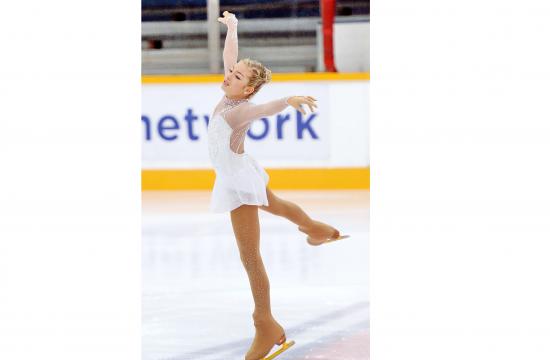 Kokotakis scored a personal best score of 99.43 points and debuted two new spin positions that have never been performed by any skater in competition. She placed third behind Kassandra Carpentier (gold) and Maxine Marie Bautista (silver).

The 12-year-old said the feeling to be on the podium at the National Championships was like a dream.

“It was the result of 23 hours a week of training and trying to become better than I was the day before,” Kokotakis said. “I felt like I had reached a goal – not my ultimate goal of competing in the Olympics, but a goal that is a step on the way. It felt like validation that I was on the right track and my dreams were going to be attainable one day as long as I keep working hard.”

Kokotakis was drawn second to skate on Saturday, Jan. 17, to perform her short program to a song by Muse.

“This is not a good draw – everyone wants to skate toward the end of the event – not at the beginning,” Kokotakis said. “But, my coach, Natalie Shaby, told me that since my event started at 8:45 am and I normally go to bed at 6:30 pm (when getting up at 4:15 am for training), skating early would be best for me. I grabbed onto that thought and decided to go out and just lay down the most emotional and heart-wrenching performance possible.”

She said her short program was to Muse’s third movement of “Exogenesis Symphony,” called Redemption.

“I have this story that I have made up that I am portraying,” she said. “This alien comes to a new planet, alone, lonely and has to created a world. She is so lonely, but finally creates a boy being. They fall in love and she is finally happy. This is the story that I tell through my skating in this program.”

When she was skating this program in the huge Greensboro Coliseum, Kokotakis said all she was aware of were her blades, the music, and the judges.

“I felt like I was telling the judges a story and I was unaware of anything else, but the connection between the judges and me,” she said. “When I finished, I hadn’t even realized there was an audience…the applause actually startled me and helped me to realize that I had skated a clean program. My score of 35.93 was a personal best and left me in second place.”

The freeskate program, otherwise known as the long program, was the next afternoon.

Kokotakis’ program was to the theme from “Romeo and Juliet” by Nina Rota.

“I love playing Juliet – she is fierce at the beginning of the program, then she falls in love and there is happiness, followed by the anguish of Romeo’s death,” she said. “My program ends with my death, so it is very emotional and dramatic. I was more nervous than I have ever been in my life, but once again, I skated a clean program and was so happy to hear the announcement that I was in third place with a score of 63.50.”

Kokotakis is now back home and training for next season.

She will be competing at the novice level and her goal is to learn all of her triple jumps and make it back to Nationals, which will be in St Paul, MN, next January.

She said she was grateful to her school, Windward School in Mar Vista, for the support of her training schedule and the help catching up when she missed class for Southwest Pacific Regionals, Pacific Coast Sectionals, and the 2015 U.S. National Championships.

“I am also grateful to my coaching team for preparing me to do my best – Alex Chang, Jere Michael, Frank Carroll, Natalie Shaby, and Richard Ewell,” she said. “I am thankful for the support of my community and my friends. Without the support of others, nothing would be possible. Lastly, I am thankful to my parents for their support and devotion to my Olympic dreams.”