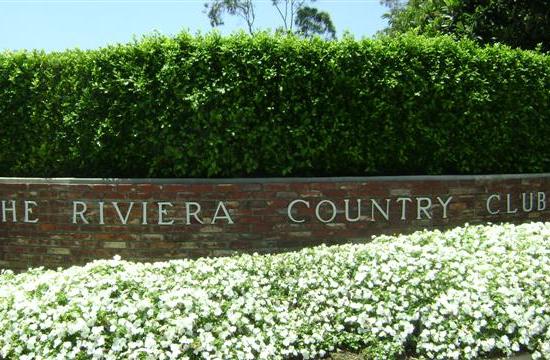 Goosen was among six golfers sharing the first-round lead, then fired a one-under-par 70 Friday to go to six-under-par for the tournament.

Canadian Graham DeLaet and Americans Ryan Moore and Justin Thomas are tied for second at five-under par. Angel Cabrera of Argentina is in fifth, two shots off the lead.

Goosen began his round on the back nine and bogeyed his first hole. He had a birdie on his fifth hole, then a bogey on his next. He completed his round by sinking a 30-foot putt for a birdie, his second on the front nine.

Goosen said “I didn’t hit the ball as good as I hit it” Thursday when he shot a five-under-par 66. Friday “was a little bit scrambling with everything really, but I got it up-and-down quite a few times and that kept the round going.”

Goosen has not won on the PGA Tour since the 2009 Valspar Championship. This is the eighth time he has played in the Northern Trust Open. His best finish was a tie for 12th in 2011.

DeLaet shared the low round of the day with Hunter Mahan at four-under- par 67, with five birdies and a bogey on the par-4 15th.

“I played well,” said DeLaet, who is seeking his first victory on the PGA Tour. “I really putted well. For the first two days, I haven’t been striking it quite as well as I expect of myself, but a hot putter will always keep you in there.”

On Tuesday, DeLaet tweeted that “If I were doing a bucket list for someone, my top non major courses on Tour: Riviera, Colonial, Muirfield Village, Innisbrook, Harbour Town.”

DeLaet was asked about that tweet Friday, responding, “You can’t fake it around this place. It’s a good, solid traditional golf course. It’s pure golf.”

Goosen was the only of the first round co-leaders to break par Friday. Derek Fathauer shot a two-over-par 73, while James Hahn, Daniel Summerhays, Vijay Singh and Derek Summerhays all shot three-over-par 74s.

The tournament concludes Sunday. The winner will receive $1.206 million.

The alternative rock band O.A.R. is scheduled to play from 3:45-5 p.m. today on The Riviera Country Club’s driving range. Fans purchasing a clubhouse or grounds ticket for today’s play will be admitted free to the O.A.R. concert.