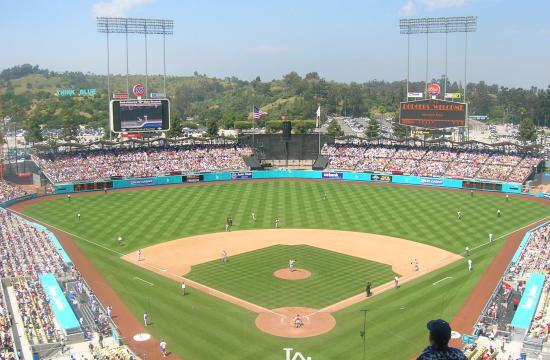 Sean “The Dancing Man” O’Brien has raised awareness for anti-bullying efforts after he experienced online body shaming. What was billed as “The dance party of a lifetime” in celebration of O’Brien and benefiting an anti-bullying campaign was held Saturday in Hollywood.

As with all Sunday home games except the final one, the Dodgers will conduct their Viva Los Dodgers family-friendly festival. Musical entertainment will be provided by 40 Watt Hype and Blue Agave

Tommy Davis, the 1962 and 1963 National League batting champion, will sign autographs in the left field pavilion from 11 a.m.-1 p.m.

Singer-songwriter Sabrina Carpenter will perform the national anthem. Her first album, “Eyes Wide Open,” was recently released by Hollywood Records. It is a collection of pop songs, including some she co-wrote.

The Military Hero of the Game will be Air Force Tech. Sgt. Michael Smith of Tulare, an active duty member of the California National Guard for the past 25 years.

Fans sitting in the left and right field pavilions will receive a pair of “Terminator Genisys” sunglasses to promote the film set to be released July 1.