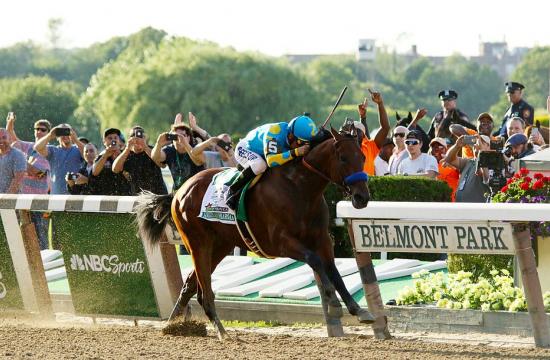 American Pharoah — who made history three weeks ago by winning the first Triple Crown in 37 years — is set to parade today before thousands of fans at Santa Anita Park in Arcadia.

The 3-year-old Kentucky Derby, Preakness and Belmont winner, who was brought back to Santa Anita with a police escort last week, is scheduled to be taken to the track’s paddock and walking ring at 4:30 p.m. He will then be led on to the track, escorted into the winners’ circle for photographs and walked down the length of the stretch back to his barn.

Santa Anita’s chairman, Keith Brackpool, thanked the colt’s owner, Ahmed Zayat, and trainer Bob Baffert for “being so incredibly generous in sharing this horse with fans from coast to coast.”

The race track will hand out T-shirts featuring American Pharoah to members of its Santa Anita Thoroughbred Club.

The racing phenom made the cover of Sports Illustrated after his 5 1/2- length win June 6 in the Belmont, the last and longest leg of the Triple Crown at 1 1/2 miles, and he, Baffert and jockey Victor Espinoza have been media darlings ever since.

Even as he was heading into the Derby, hopes were high for the bay colt who sports earplugs during races and a shorter-than-usual tail that’s been rumored to have been nipped off by another colt.

American Pharoah won the award for top 2-year-old male for his 2014 campaign, which included a victory at Santa Anita in the FrontRunner stakes last September when Baffert said the colt showed “a lot of brilliance.”

For weeks, he has been ranked the top 3-year-old and took over the top of the rankings for top horse in the country following his win in the Belmont Stakes.