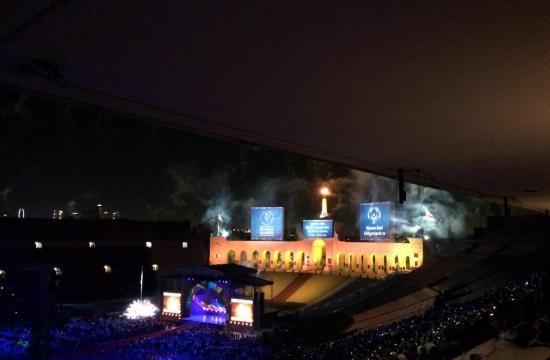 The first medal event is track and field’s 10,000 meters at USC’s Loker Stadium. Medals will also be awarded in triathlon, which will be held in Long Beach and in swimming at USC’s Uytengsu Aquatics Center.

Saturday’s nearly 3 1/2-hour opening ceremony at the Los Angeles Memorial Coliseum began with a videotaped welcome by President Barack Obama and ended with the lighting of the Olympic torch in the peristyle end.

In a 3 1/2-minute speech officially opening the Games, Michelle Obama told the athletes, coaches and officials assembled on the Coliseum’s field and a crowd announced at 62,338 that “over the past few years, my husband and I have seen Americans unite in so many ways across the country.

“We’ve seen folks coming together to give back to our military families. We’ve seen congregations rallying around families in need. We’ve seen communities rising above tragedies to heal the divisions that too often tear us apart.

“And these games are a perfect reflection of that unity. They show us that we’re all in this together — that we can lift up our friends and neighbors, and that we can bring out the best in each other to reach even higher heights.”

Obama told the athletes she and her husband are “so incredibly proud of you.”

“And we love you all from the bottom of our hearts,” Obama said. “We love you so much. You fill us with so much joy. And we cannot wait to see all that you’ll accomplish over these next few days, but, more importantly, in the years ahead.”

The torch was lit by Destiny Sanchez, a 16-year-old from Norwalk who will compete in track and field. She was assisted by Rafer Johnson, the 1960 Olympic decathlon gold medalist who lit the torch for the 1984 Summer Olympics, helped found Special Olympics California in 1969 and has been involved with the program  since then.

“You represent the very best of the human spirit,” said the president, who is in Kenya. “Pride, teamwork, friendship, treating everyone with dignity, giving everyone a chance. That’s what the Special Olympics is all about so it makes sense that these games are being held in America.

“We are a nation founded on the principle that all of us are created equally. We’re a nation built on the promise of life, liberty and the pursuit of happiness. Because of you, the athletes participating today, and those who came before you, that fundamental principal is acknowledged.”

The ceremony, described by Patrick McClenahan, president and chief executive of LA2015, the Games’ organizing committee, as “a music celebration of 6,500 athletes and their coaches,” included performances by Stevie Wonder, Avril Lavigne, O.A.R., Cassadee Pope. Singer-songwriter Siedah Garrett, performed “Reach Up L.A.,” the theme song she wrote for this year’s event.

The ceremony was similar to an Olympic Games opening ceremony, with the parade of athletes, raising of the Special Olympics flag and lighting of the cauldron, McClenahan said.

The parade of athletes began with the 149-member delegation from Greece entering from the tunnel leading from the stadium’s locker rooms on a red carpet in the middle of the field. (The running track, used for the opening ceremonies for the 1932 and 1984 Olympics was removed as part of a renovation of the stadium completed before the start of the 1993 football season.)

As with the Summer and Winter games, Greece led the parade of athletes in honor of it being the birthplace of the Olympics. The other 164 delegations followed in alphabetical order, with the 480-member U.S. delegation, as host nation, last.

“Our city is home to every culture, every language and every nationality,” Garcetti said. “Welcome home. You’re in Los Angeles.”

Charles, who said competing in a regional Special Olympics competition after being diagnosed with a learning disability taught him how fast he was, administered the athletes’ oath, “Let me win, but I cannot win, let me be brave in the attempt.”

Organizers announced this afternoon that tickets for the opening ceremony had sold out, although the seats in the peristyle end and others without a view of the stage and the upper-most rows of the 90-thousand-plus seat stadium were not used.

Competition began Saturday in soccer and tennis at UCLA, basketball, swimming and track and field at USC and bocce at the Los Angeles Convention Center.

The closing ceremony will be held Aug. 2 at the Coliseum.

Held every two years and alternating between Summer Games and Winter Games, the Special Olympics World Games is a direct descendant of the July 1968 event organized by Eunice Kennedy Shriver and the city of Chicago to foster new opportunities for acceptance and inclusion for individuals with intellectual disabilities.