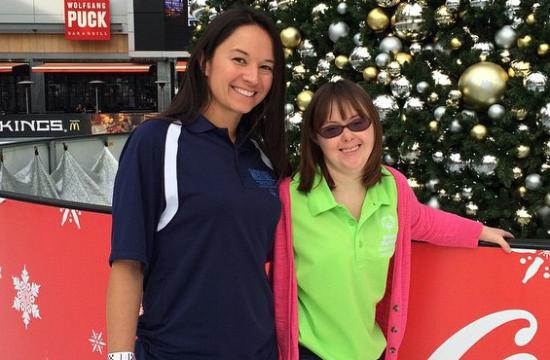 This month thousands of Special Olympic athletes will arrive from all corners of the world to participate in the 2015 World Games, the largest event hosted in Los Angeles since the 1984 Olympic Games.

She first took up gymnastics 10 years ago as a way to help improve her balance and has since continued her training.

While she first began gymnastics as a way to improve her balance and dexterity, those around her have not only seen an improvement in her physical confidence but in her self-esteem as well.

Griffith has been with her coach, Natasha Burgos, since the beginning of her gymnastics career, and the two have formed a very strong connection. The two meet every Wednesday at Broadway Gymnastics School to nail down routines and practice with the rest of the Westside Special Olympics team.

While floor routine is her favorite event, Griffith, who has Down syndrome, will be participating in the full gymnastics event rotation at the John Wooden Center at UCLA.

She said she is looking forward to this summer event of a lifetime.

“I’m excited to participate in the World Games because it’s a challenge to compete, plus I will get to meet new people and it’s the opportunity of a lifetime,” Griffith said.

When she can’t be found at the gym, Griffith loves to dance, play basketball, and watch football on TV. She is working toward living independently, and after the World Games she’s hoping to attend Taft College in Bakersfield.

No other organized event in the world has the emotional and social impact of the Special Olympics World Games. For the athletes and their families, it opens doors to unimagined possibilities.

For three days this month (July 21-July 24), Santa Monica will serve as the base camp for select Special Olympics athletes by providing an opportunity to visit iconic Santa Monica locations including Muscle Beach, Downtown Santa Monica, Santa Monica Place and Pacific Park as they prepare for the competition of a lifetime.

As a Host Town, Santa Monica is responsible for 100 percent of the costs of hosting the Romanian and Brazilian athletes, coaches, and chaperones.

With approximately 7,000 athletes, 3,000 coaches, and an expected 500,000 spectators, the 2015 Special Olympics is anticipated to be the most prominent sports and humanitarian event in the world this year, as well as the single largest event in Los Angeles since the 1984 Olympic Games.

The Opening Ceremony, to be held July 25 in the historic Los Angeles Memorial Coliseum, site of the 1932 and 1984 Olympic Games, is expected to attract 80,000 spectators. ESPN will present coverage of the World Games to millions of fans around the world.