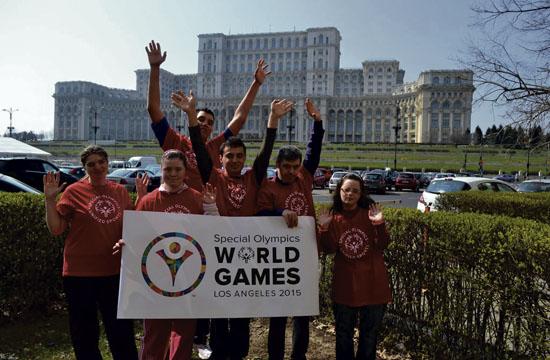 The Special Olympics World Games begin today with the opening ceremony at the Los Angeles Memorial Coliseum and competition at three sites in what the head of the organizing committee said will be “one of the most inspirational events in sports of all time.”

“As you look at our athletes and you learn to love them the way they are, accept them for who they are, you learn to look at other people with differences and realize we all have value,” said Patrick McClenahan, president and chief executive of LA2015, its organizing committee.

The Games’ mission is “awareness that leads to acceptance and inclusion of people with intellectual disabilities,” McClenahan said.

“Every time we get our athletes and their courage, determination and joy in front of people, their hearts and minds are changed about the value of people with an intellectual disability,” McClenahan told City News Service.

Held every two years and alternating between Summer Games and Winter Games, the Special Olympics World Games is a direct descendant of the July 1968 event organized by Special Olympics founder Eunice Kennedy Shriver and the city of Chicago to foster new opportunities for acceptance and inclusion for people with intellectual disabilities.

Summer editions of the World Games were held in the United States through 1999, then went international, to Dublin in 2003, Shanghai in 2007 and Athens in 2011.

Los Angeles was selected in 2011 by Special Olympics International to be the site of the 2015 Games, over a bid from South Africa.

McClenahan was a television executive and chairman of the board of Southern California Special Olympics and was approached by officials from Special Olympics International who asked if a group representing Los Angeles would be interested in bidding to be the host city for the 2015 World Games.

A bid committee was formed. The bid’s theme was “In a city full of movie stars and all-stars, the athletes will be the stars of this show,” McClenahan said.

Among the factors McClenahan credited for the bid’s success was backing from a wide range of supporters, including the entertainment, tech and sports industries, and the region’s diversity.

“With all the great things (we did), I think we won the bid when we took (the international selection committee) to a Laker game,” McClenahan said.

“I asked (Laker executive) Jeanie Buss to honor seven athletes from Southern California that were going to be on Team USA (in the World Games) that summer in Athens. The moment those athletes walked out to midcourt and 18,000 fans showered them with their encouragement was the moment I think that won us the bid.”

Approximately 6,500 Special Olympics athletes in 25 sports from 165 Special Olympics accredited programs from around the world will compete in Los Angeles’ biggest sporting event since the 1984 Summer Olympics, according to organizers.

There will be 290 events — 267 for Special Olympics athletes and 23 Unified Sports competitions pairing athletes with and without intellectual disabilities.

McClenahan described the opening ceremony as “a music celebration of 6,500 athletes and their coaches.”

It will be similar to the Olympic Games opening ceremonies, with the parade of athletes, raising of the Special Olympics flag and lighting of the cauldron.

First lady Michelle Obama, an honorary co-chair of the Games, will be in attendance.

Organizers are expecting about 62,000 people to be at the stadium and are strongly encouraging attendees to use public transportation to get to and from the Coliseum because parking availability will be significantly curtailed from events normally held at the stadium.

Competition will also be held Saturday at UCLA (soccer and tennis), USC (basketball, swimming and track and field), and Los Angeles Convention Center (bocce). Competition will continue through next Saturday. The closing ceremony will be held Aug. 2 at the Coliseum.