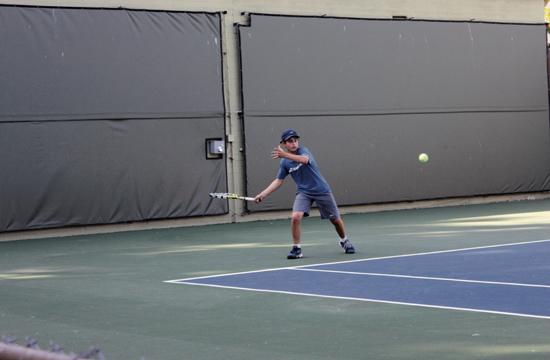 Former pro tennis star Pam Shriver was at the Santa Monica Tennis Club to watch her son compete in a junior tournament this week, and to offer advice on how tennis can become a more popular sport in the United States.

Some of the top junior talent in the Los Angeles area and beyond competed in the 86th annual Santa Monica Junior Open. The USTA sanctioned event drew about 250 talented boys and girls to the local courts to compete in singles and doubles competition.

Shriver, a U.S. Open finalist in 1978 who teamed with Martina Navratilova to form the most dominant women’s doubles combo of the 1980s, was in Santa Monica this past week to watch some of the junior action. A Brentwood resident, Shriver is also a well-respected tennis analyst for ESPN.

“I have two sons that entered both the Dudley Cup and the Santa Monica Open,” Shriver said while watching the tennis action from the bleachers. “My boys have been playing tournament tennis for just a few months. So it’s kind of our first go-around. This is great because it’s so close and friendly and (tournament director) Bill (Nissley) does a good job running it. It’s Santa Monica, it’s great.”

Not so great, however, is the state of American tennis. Once an enormously popular sport, tennis has recently taken a back seat to many other teams sports in the U.S.

“I think that for boys in particular there are so many choices of sports,” Shriver said. “I feel that we are not doing enough as a sport to get the best athletes. We need to partner with youth basketball, youth soccer, youth baseball, and really market the idea of athletes not specializing too early. We need to tell people in other sports what an incredible sport tennis is to play. It’s great for both genders; it’s equal. So tennis should be more attractive to play.

“When you see these kids play you see endurance, hand-eye coordination, footwork, balance, mental strength, problem solving – literally everything. And tennis is a safe sport; a head-safe sport. In this era with football and even soccer we have to be concerned with our kids whether it’s a safe head sport. You don’t have concussions in tennis unless it’s very rare. It’s a lifetime sport and it’s a global sport. Globally, it’s a really popular sport. It’s grown in leaps and bounds.”

Shriver feels the U.S. is lagging behind when it comes to developing top tennis talent.

“There are many more countries that have player-development programs and great coaches,” she said. “So it’s very competitive. There’s that, and there’s what we are doing in this country.”

Shriver believes that team tennis should be more encouraged.

“We need to find a way to make it more fun and enjoyable and I think team tennis is one of the ways.

The kids should be playing because they love it and they’re having a ball.”

Programs like USTA can help talented players develop, but it won’t assure success at the pro level.

“Most of the great champions do not come from the USTA,” Shriver pointed out. “Jimmy Connors, John McEnroe, and Chris Evert did not come up through the USTA system.”

You never know when the next great player might be coming.

While Serena Williams has been the dominant force in women’s tennis the past few years, there are questions on the men’s side about the next great American superstar. John Isner is the highest ranked male player at #12, followed by emerging star Jack Sock at 30th. Only four American men are ranked in the top 50, the lowest it’s been in a long time.

“There’s a group of really good 17 and 18 year olds coming up,” Shriver noted. “Everyone is thinking that it might change. But it’s never going to be the way it used to.”