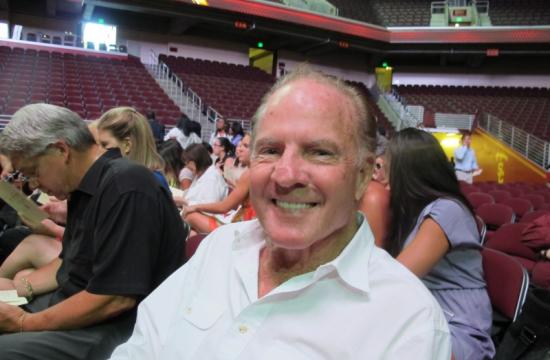 Gifford — who was born in Santa Monica and grew up in Bakersfield — was a football All-American at USC in the early 1950s and an All-Pro player during a 12-year career with the New York Giants that ended in 1964.

He dabbled in broadcasting and acting as a player and when he retired be began a long career in sports television, first with CBS and then with ABC.

In 1971, Gifford joined Don Meredith and Howard Cosell to form the broadcast team in the inaugural season of ABC’s Monday Night Football, which became a sports TV institution.

He stayed in the Monday Night Football booth for 27 years, stepping down in 1997.

“It is with the deepest sadness that we announce the sudden passing of our beloved husband, father and friend, Frank Gifford,” a family statement said. “Frank died suddenly this beautiful Sunday morning of natural causes at his Connecticut home. We rejoice in the extraordinary life he was privileged to live and we feel grateful and blessed to have been loved by such an amazing human being.”