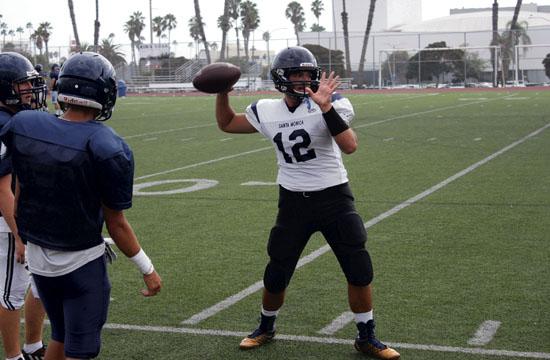 Ramsey Lambert has been all over the map when it comes to coaching football at the high school and college level, but his latest stop is in Santa Monica. The new Vikings head coach already has an experienced squad to work with this season.

“We have a wealth of seniors,” Lambert said. “We also have some new guys coming in who have worked very hard. I like how our players fight and battle.”

Last year, the Vikings finished third place in the Ocean League. This season, Lambert is setting the bar even higher.

“We want to compete for the league championship,” he said. “We would be disappointed if we weren’t in the playoffs.”

Santa Monica players have been practicing this past week and have a scrimmage on Aug. 28 against Torrance High School. The Vikings’ first regular season game (non-conference) is next Friday, Sept. 4 against Redondo Union at Santa Monica College.

While the Vikings have a number of seniors leading the way, the team will be relatively inexperienced at quarterback. Sophomore signal-caller Dariush Sayson will be making his first varsity start this season, but the head coach is optimistic about his ability.

Senior running back DeAndre Parks has impressed his head coach so far in practice, while senior center Juan Castillo will lead the offensive line.

Defensively, “we’ve got a ton of guys who are physical and quick,” Lambert noted. “We have a deep linebacking crew. The defensive line is a bit on the light side, but players are quickly learning their positions.”

Lambert brings plenty of coaching experience to Santa Monica, having been a high school coach in California and Hawaii and Division 2 college coach in North Dakota.