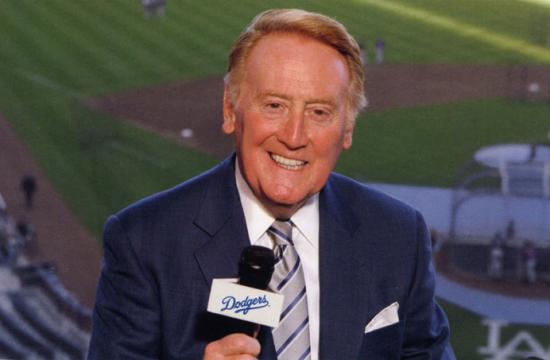 Vin Scully said on Saturday that 2016 “realistically” will be his final season as a Los Angeles Dodgers announcer.

“I don’t want any headlines, but I would say next year would be the last one. I mean how long can you can keep fooling people?” Scully told reporters at a media availability at Dodger Stadium conducted one day after it was announced he would remain with the team for the 2016 season, which would extend his record stay to 67 seasons.

Scully, considered by many the greatest sportscaster of the 20th century, said he does not want to have a farewell tour.

“The last thing I want is to have one of these glorified goodbyes,” Scully said. “With God as my judge, I would have been thrilled if they announced I was coming back in the notes” distributed to reporters before the game.

The 87-year-old Scully said a determination on his 2016 schedule would be made later. During the regular season, he only announces home games, along with road games in San Francisco and Anaheim.

Scully said he would return to the Dodgers for the 2016 season even if the team wins this year’s World Series.

“What the team does on the field will have absolutely no effect in my life and decision that I make. I’d be very happy for them, but it would not change my mind in any way, shape or form.”

Scully said “one of the many reasons I pray to God” about being able to return for next season is his enjoyment of seeing such friends at Dodger Stadium as “Marie on the elevator and James and Robert outside the press box and all the guys and girls in there, plus the crew that I work with.

“And just to collectively pick all these people up and say goodbye? Because when I leave, I will leave. I will not be hanging around. It’s really a monumental thought — how can I leave all these people? Whether you know me or not, you have meant a great deal to me over the years. So that was just one of many considerations that I have.”

Scully said his wife Sandi told him “I don’t want you home babysitting me. I know that if you’re home you’ll become an old man just waiting to do something around the house. If you still want to do it and if you still feel you can do it, then you’ll have my blessings.

“I said, ‘Your blessings are good enough. I don’t have to go to Rome.”‘

Scully said “when you get to where I am, you’re very grateful that you’ve gotten to be that old, but I never wanted to be old.”

“When I thought about this year retiring I had a lot of of people say, ‘Please, don’t retire,”‘ Scully said.

“I don’t mean they were baseball fans telling me they want to hear me, just people saying ‘You don’t want to retire.’ My doctor said to me, ‘Do you enjoy doing what you’re doing?’

” ‘Do you still do it reasonably well?’

“That kind of scared me a little bit. Baseball has meant really a good portion of my life and to give it up? For me, to suddenly put the key in the ignition and turn the engine off, it’s kind of a frightening thought. I’ve put in the key and left it there, God willing, for another year.”