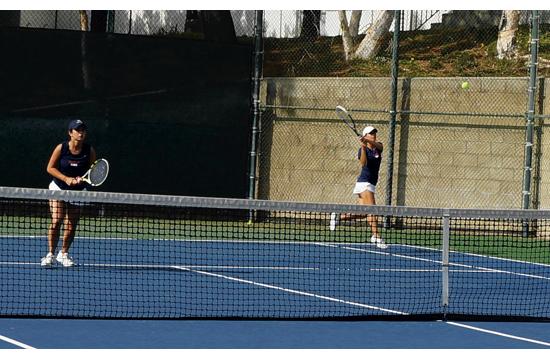 The Roadrunners kicked off the fall season playing league opponent, Sierra Canyon, Thursday, Sept. 16.  Crossroads singles players, Maya Matthews, Becca Wachter, and Annie Myron swept their sets while doubles teams Phoebe Katims and Emily Sures, along with Grace Attanasio and Natasha Resnick, beat their opponents. It was a strong showing by the entire squad as Crossroads Girls Varsity Tennis walked away with a 14-4 win.

After two cancelled games due to the high heat, the JV squad finally had a chance to compete on Thursday, Sept. 16 when they took on Archer at Memorial Park Tennis Courts, where the junior varsity squad beat Archer 7-6.

Kate Gershwin won her second singles match by fighting back from facing three match points and back from an 0-3 tiebreaker deficit for the win.

Danielle Contreras won two while Kate Kenny split hers. The doubles teams – Sarah Reid and Ava Westlin, Addie Gruszynski and Charlotte Kanner, along with Emma Blaney and Claire Brooks – battled hard and split their matches with Archer as well.  Without the strong effort and fight from each and every Crossroads competitor, the team would not have been able to take the match.