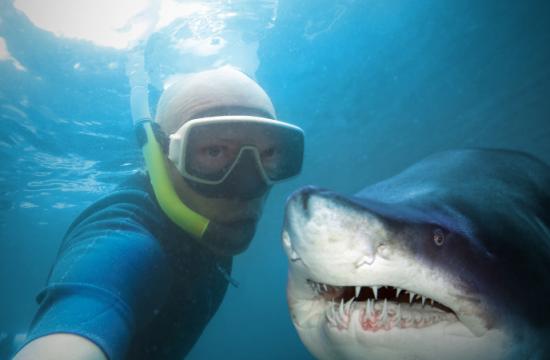 Ever since “Jaws” scared millions of moviegoers in the summer of 1975, there’s been a fear and fascination with sharks.

But lately, that fear has become all too real for California swimmers and surfers. Last weekend in Morro Bay, it was reported that a white shark took a big bite out of surfboard and the startling image was posted all over media outlets in Los Angeles. During the same week, San Diego lifeguards ordered a stretch of beach in La Jolla closed after the sighting of an 8-10 foot hammerhead shark.

Other recent shark sightings have been reported at popular beaches in Huntington, Laguna, Hermosa, and Redondo.

At Manhattan Beach, some 50 beachgoers have reported seeing sharks since mid-July.

These underwater predators aren’t just confined to California beaches and the Pacific Ocean. At least five reported shark attacks occurred at coastal beaches in North and South Carolina in June.

What’s going on here? Why the seemingly sudden increase in shark sightings and attacks?

Some experts believe the increase in shark activity might be related to climate changes. Due to the recent heat wave in Southern California, “we’re starting to see a lot of interesting sea creatures that aren’t typically here,” said Jose Bacallao, operations manager for Heal the Bay’s Santa Monica Pier Aquarium. “As the water stays warm we’ll start seeing new organisms. As climate change continues it will alter things.”

The hot summer weather has attracted large crowds of swimmers and surfers into the ocean.

Some of the most common species of sharks in Southern California beaches include thresher, mako, angel, horn, and leopard sharks.

“We do see white sharks in Santa Monica,” Bacallao observed. “More frequently than not we see very small white sharks, juveniles starting around five or six feet long. Rarely do we see adult sharks that are in the 10-15 foot range.”

Bacallao added that most sharks in the ocean are harmless unless provoked, or if there is an accidental encounter with human beings. He feels that a popular movie like “Jaws” – while brilliantly directed by Steven Spielberg with an unforgettable musical score by John Williams – has helped create many misconceptions about sharks.

“While I’m a fan of the movie ‘Jaws’ and think it’s a neat story, it’s just inserted false information about how sharks behave in the ocean and how they interact with humans,” Bacallao said. “Shark attacks on humans are actually really, really rare. Movies and documentaries that depict sharks as predators of humans and maneaters is really false.”

He added the attacks in the Carolina beach areas may have been due to poor visibility and sharks “chasing other prey when they just randomly ran into a person.”

Despite some of these rare, random shark attacks being reported around the country, Bacallao believes Santa Monica residents should generally feel safe swimming in the ocean near the Pier. He said that he has yet to hear of any shark attacks off the beaches of Santa Monica. But if a shark is spotted in area waters people should be alert and use common sense.

“Just like anything else in nature, if you see a bear or any other form of wildlife you’d just want to get out of its way,” he said.

According to a website called “Beachapedia,” while shark attacks remain a common fear among ocean users, sharks don’t typically prey upon humans and statistics show attacks are exceedingly rare given the millions of people in the ocean every year.

At Heal the Bay’s Santa Monica Pier Aquarium during “Shark Sunday” last week, it was revealed there are only about 10 reported shark attacks on average per year.

The California Department of Fish and Wildlife reported that since 1950, there have been 101 white shark attacks on humans in all of California. There have been 13 fatal attacks since 1952, with only three of those being south of Santa Barbara.

The most feared shark continues to be the Great White, although most do not reach the size and ferocity as the killer shark in “Jaws.” White sharks generally feed on other fish, mammals, and even whales. They reach maturity around 15 years of age and can expect a life span of over 30 years.

But thanks to an iconic thriller like “Jaws,” Discovery Channel’s “Shark Week,” and even the silly “Sharknado” on the Syfy Network – the popularity and fascination with sharks is timeless.