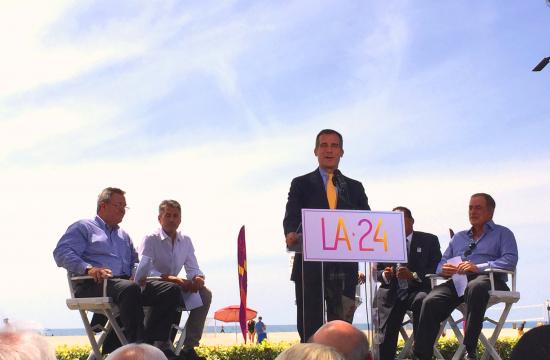 The Los Angeles City Council voted unanimously today to move forward with a bid to host the 2024 Summer Olympic Games, prompting the U.S. Olympic Committee to formally name Los Angeles as its official bidder for the athletic spectacle.

“It is my distinct honor to formally name the city of Los Angeles as the U.S. bid to host the 2024 Olympics,” United States Olympics Committee CEO Scott Blackmun said at a beach-side news conference in Santa Monica about an hour after the council’s vote.

Garcetti teamed with sports businessman Casey Wasserman, chairman of the nonprofit bid committee LA24, to renew an effort to bring the Games to Los Angeles after Boston, the USOC’s initial choice, backed out over concerns about financial liability.

Garcetti has in the past few weeks pointed to Los Angeles’ existing sports venues and other amenities, some of which are already being upgraded, as reasons the city would be a good choice for the International Olympic Committee, which is working to change how it runs its quadrennial sporting events.

Blackmun seized on that idea today, saying the IOC is in the midst of an effort backed by IOC President Thomas Bach that call for a new bid process that “offers greater flexibility and less risk to cities that are interested in hosting the Games.”

Blackmun said the IOC “is looking to partner with cities to create a new hosting model, a model that sheds excessive spending, using existing venues and builds as little as necessary.”

Council members agreed to back the bid today only after city attorneys assured them the city will not be making any immediate financial commitments.

Deputy City Attorney Jim Clark said he was “in constant contact with the lawyer for the (LA24) bid committee up to 11 o’clock last night.”

“We exchanged lists of things that would have to be covered by negotiations. His first item was the financial commitment, if any, of the city. So he recognizes by this action this council is not committing the city financially at all,” Clark said.

Chief Administrative Analyst Sharon Tso said the city will still have an opportunity to weigh in on the proposed budget of the Games, and any plans for sports venues or use of city facilities.

Councilman Paul Krekorian said prior to the vote that “this is a great Olympic city.”

“Let Paris and Rome and whoever else who wants to compete know, we’re in this to win it, and I think we will,” Krekorian said.

The “joinder” agreement approved by the City Council today was requested by the USOC, which has a Sept. 15 deadline to submit a proposed U.S. bid city to the IOC.

He compared the next few weeks of negotiating the details of agreements with LA24 and the USOC to the “pre-nup stage.”

The potential Olympics bid was greeted with excitement by many council members last week, including Councilman Joe Buscaino, who earlier this year expressed disappointment on Twitter at Boston being chosen.

“I’m fired up over this bid,” Buscaino said of the city’s second chance.

But some city officials and residents have urged caution in pursuing the bid, saying the city could be on the hook for cost overruns incurred by hosting the Olympics, which may cost more to run than estimates by boosters.

LA24 officials estimate the cost for hosting the 2024 Olympics in Los Angeles would be $4.1 billion, or $4.6 billion when a roughly $400 million contingency fund and insurance are included.

They project revenue from the Games will bring in $4.8 billion, resulting in a profit of $161 million going to LA24.

The budget anticipates the International Olympic Committee will contribute $1.5 billion, or 31 percent of the revenue, with domestic sponsorships and ticket revenue making up the other two-thirds. The bid packet also included details about how the Olympics might be operated.

The Olympic Village would be next to the Los Angeles River in Lincoln Heights — in a Union Pacific rail yard known as the “Piggyback Yard” — and calls for track-and-field and the opening and closing ceremonies to be held at a renovated Los Angeles Memorial Coliseum.

LA24 officials and Garcetti said the bid proposal and the budget figures are only a “first draft” and will continue to be refined over the next two years.

The IOC is expected to make a final decision on a host city in September 2017.

Los Angeles is looking to join London as the only cities to host the Summer Olympics three times. Los Angeles was the site of the 1932 and 1984 Games.