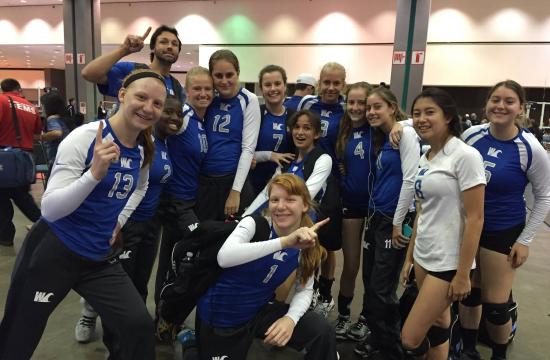 Volleyball continues to grow in popularity, especially in California where the sport is booming.

In Santa Monica, the WestCoast Volleyball Club is gaining momentum as it enters its second year in existence. Co-founder and Indoor Director Aaron Wexler wants to see the growth continue.

“There’s a lot of momentum in the sport,” said Wexler, an alumnus of Santa Monica High School who went on to play for the UCLA volleyball team and continues to compete on beach circuits.

“Year one of our program was a success. We had a total of 25 girls for indoor volleyball and on the beach. We’re just looking to expand and become a great club on the Westside of Los Angeles.”

“We’re an emerging club,” Wexler said. “Our goal is to create more teams.”

Indoor volleyball practices start in October with competition beginning in January. Many of the tournaments will be held next year at the American Sports Center in Anaheim. The WestCoast Volleyball Club will travel to the Junior Olympic National Qualifier in Denver, Colorado, and the AAU Junior National Championships in Orlando, Florida.

The interest in beach volleyball is at a high level right now, and the sport will draw even more attention with the upcoming Summer Olympics in 2016.

“Beach volleyball is probably one of the most popular sports to watch,” Wexler emphasized.

Indoor volleyball is also a big hit in the Los Angeles area and Wexler is hoping to draw more attention to the sport with his WestCoast Volleyball Club.

“Our primary objective is to develop student-athletes into becoming the best indoor volleyball players and teammates they can be,” Wexler said. “There’s so much opportunity for these girls to compete at all different levels. We also assist in the college recruiting education and process for those interested in becoming collegiate prospects.”

Speaking of college, Wexler not only played for the UCLA men’s volleyball team but later was the volunteer assistant coach for the Bruins women’s team that won the Division 1 national title in 2011. Obviously, Wexler is a great teacher of volleyball and now he wants to give back to the Santa Monica community. He’s assisted by Travis Schoonover, who is the Beach Director of the WestCoast Volleyball Club.

“The best thing is our approach to the game,” Wexler pointed out. “We see the game from an on-court perspective. We use progressive-based drills with an emphasis in quality repetitions. In addition, we employ mind-set techniques. We help kids visualize their success and we use positive reinforcement and encouragement.”

To register for the WestCoast Volleyball Club and for more information go to the club’s website at westcoastvbc.com.