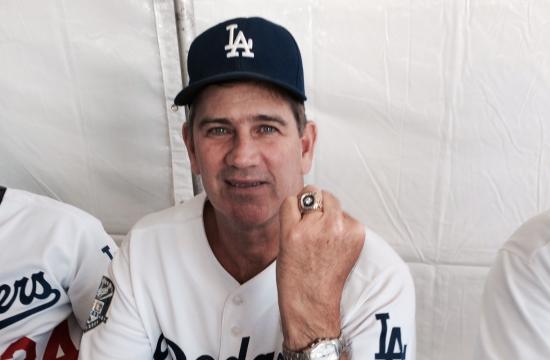 The 1988 baseball season was a magical one for the Los Angeles Dodgers as the team defied the odds to win the World Series. Tim Leary, a pitching star at Santa Monica High School in the 1970s, was a key member of that ’88 Dodgers title team.

Leary had a breakthrough season on the mound for the Dodgers in 1988, finishing with 17 wins, six shutouts and a 2.91 ERA. The right-handed hurler was named the “Sporting News” Comeback Player of the Year for his regular season performance.

L.A.’s ace that season was Cy Young Award winner Orel Hershiser, who gave one of the all-time heroic pitching performances in post-season history. Another star of that season was slugger Kirk Gibson, who blasted a dramatic ninth-inning home against the favored Oakland Athletics in game one of the World Series. It was the “shot heard round the world” and helped the Dodgers beat the A’s for the title.

It’s been 27 years since and counting since the Dodgers have won the World Series, and recently Leary looked back on memories of that magical ’88 season.

“The team really started to come together in July as we started playing well after the All-Star Break. I think we won five games in a row and it coincided with my start of winning 10 games after the All-Star break,” Leary said. “By mid-August our chemistry was that of a team that had been together for many years. It was a huge testament to Gibson, manager Tommy Lasorda, and (catcher) Mike Scioscia.”

The Dodgers won the National League West Division by seven games over the Cincinnati Reds. In the playoffs, the Dodgers beat the New York Mets and then pulled off one of the great upsets in beating powerful Oakland.

“We were in every game as our pitching was unbelievably consistent from one through 10,” Leary recalled. “And every pitcher threw in relief that year. Orel (Hershiser) and I were the top two pitchers that year with Fernando (Velenzuela) mainly pitching on guts. He finally had to go on the DL because of a worn out shoulder. Tim Belcher was a swingman who had finally found command of a fastball and slider. He had wins as a starter and saves as a reliever and won the NL Rookie Pitcher of the Year.”

The Dodgers relied on several role players that special season.

“There was a group of players like ‘The Energizer’ Steve Sax, Mickey Hatcher, and the ‘Old Bull’ Rick Dempsey, who was the perfect number two catcher for that team.”

One of the star players was Kirk Gibson, who fought through an injury to hit his dramatic home run off Oakland’s superstar relief pitcher Dennis Eckersley in game one of the World Series. At the time, Eckersley was considered nearly unhittable as a relief pitcher, while Gibson was less than 100 percent when he went up to the plate.

“We were all expecting Eckersley to throw a slow slider on a 3-2 count to a left-handed hitter, and Gibby hit it perfectly,” Leary recalled.

The rest is history as manager Tommy Lasorda and players crashed the field in jubilation. Leary said that playing for Lasorda “just meant playing at a very high level. The Dodgers knew that to win you have to out-pitch everybody.”

Leary played for other teams during his Major League career including a stint in New York, but his time with Los Angeles in 1988 will always be a year to treasure.

“It was the best pro baseball year of my life,” he said.