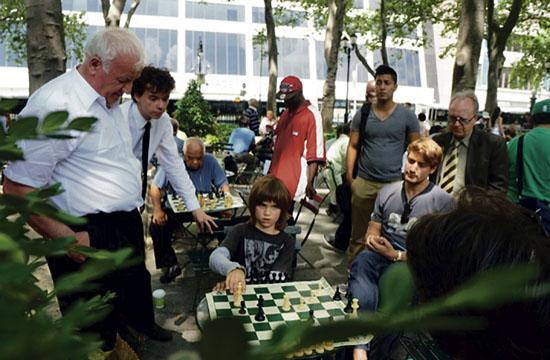 Chess has been his obsession since he was six years old, and that focus and determination has led Santa Monica resident Gabriel Eidelman to qualify for the World Youth and Cadet Chess Championships that will take place in Halkidiki, Greece, from Oct. 24 to Nov. 5.

The 10-year-old chess master will soon get the chance to test his skills against the best players in the world in the 10-Under Age Group.

“It’s been quite a ride for our family,” said proud mother Claire Benoit. “It’s become a way of life for us to spend most of our long weekends at chess tournaments usually lasting three days. We don’t see much of Gabriel during those tournaments since he’ll usually play two games a day, that can last up to four to five hours.”

Claire said she noticed her son’s interest in chess at an early age.

“Gabriel often played casually with friends and cousin,” she said. “My husband and I played him at times but it took no time for him to start beating us on a consistent basis. His interest in chess gained a lot of momentum and he started to study famous games by Grandmasters and World Champions and read chess books along with some online tutoring.”

Even on trips to Europe young Gabriel would pull out his chess board to study at every opportunity.

“His only interest in Paris was to locate a little bookstore he saw online where they had a great collection of chess books,” Claire said.

“Mick became a big part of Gabriel’s chess life, as he started to attend the club on most weekends,” Claire said.

It wasn’t long before Gabriel started to win many of the scholastic weekly tournaments in this club and within a few months he broke the “1000” rating and was ready to move on to play in the adults section and win many games.

He often spent 6-7 hours per day playing chess and continued to receive instruction from several chess experts. His rating was climbing rapidly and he started to compete in many local tournaments.

Gabriel’s strong showing in these tournaments showed he was ready to compete against the best chess players of all ages. When he was only eight years old, he tied for first place in a field of 40 competitors (mostly adults) at a big tournament in Anaheim. He also placed in the top three in other chess tournaments across the country.

Last year, Gabriel made the All-American Chess Team, considered one of the highest honors attainable by a young chess player. And recently he’s been tutored at the prestigious Vellotti Chess School.

A fifth-grader at Mirman School in Los Angeles, Gabriel is an outstanding student who loves math and science. His mother says he’s also very athletic, enjoying soccer, basketball, and ping-pong among other sports.

Right now, though, Gabriel is preparing for the big challenge ahead at the world chess tournament in Greece.

“His long absence from school during the upcoming tournament in Greece will be challenging,” Claire stated. “I have to say that his school and all his teachers have been extremely supportive and accommodating for this significant endeavor. Many chess prodigies are home-schooled to accommodate the schedule of tournaments. Gabriel loves going to school and he fully intends to juggle it all and make it work.”