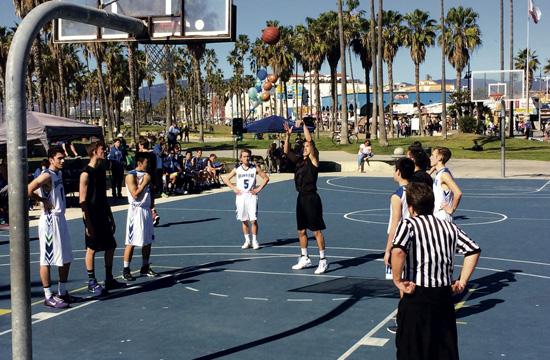 Continuing an annual rivalry, Santa Monica schools took to the beach basketball courts recently in a close match that means much more to the players than the score.

Venice Beach’s basketball courts, fixated in popular culture as they are, might seem a bit out of reach, even to those who live in the area. However, four years ago, Pacifica Christian High School in Santa Monica started a tradition that has embraced the courts as a local institution.

The Westside Outdoor Classic is held one weekend a year toward the end of Pacifica’s regular season against its league rivals – for the boys; Albert Einstein Academy, for the girls; Archer School for Girls.

These are the only outdoor varsity basketball games in the state that are sanctioned by the California Interscholastic Federation, the governing body for California’s high school sports.

“The idea is that we want to give our kids just a different experience and have an outdoor game that draws in people that might not usually come to some of our other games,” said Pacifica’s athletic director Kevin Kelsey, who has held the post for 11 years.

“This is an easy way to attract more people in the community. It also gives us a little more significance in the community on the West side of LA, Venice, and Santa Monica…more people can just walk down here and see us play a legitimate game at the end of the season,” Kelsey said. “This is a big game for us and so, that’s the other idea is that it’s a competitive game as well, with a really good team who we’ve got a rivalry with,” he added.

The game against Albert Einstein, which took place Saturday, the day before Super Bowl Sunday, filled the two available stands with supporters and onlookers, stationed alongside a court situated between a hill of grass and the Venice boardwalk.

Kelsey announced the scores and referee calls in lieu of a scoreboard.

Student supporters and those who could not find space on the stands crowded on the grass behind the teams.