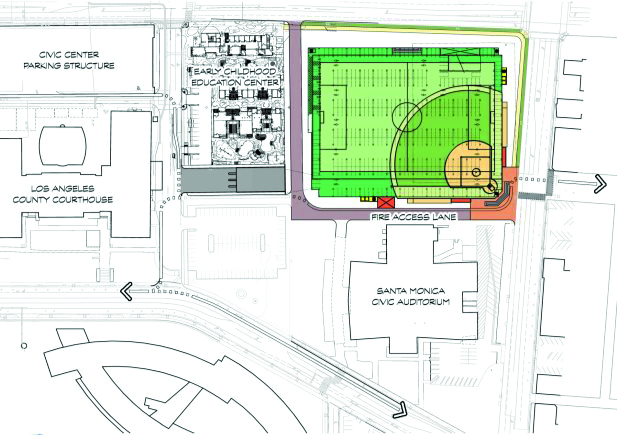 Leading the report; a temporary field budgeted at $8.6 million plus $250,000 for a parking study, and a permanent field plus two levels of subterranean parking costing a cool $95.4 million.

The seemingly-astronomical figures have sent ripples through the local community, many who have been calling for a playing field on the space for almost 20 years.

“Using the plot as an additional playing field should not be problematic, it should be welcomed,” former Chair of Santa Monica’s Recreation and Parks Commission and current Arts Commissioner, Phil Brock told The Mirror, balking at the projected costs.

“That’s ludicrous,” Brock said, referring to the temporary field estimate. “That is a totally unhinged financial quote.” Brock has been involved in the push for a field on the Civic site from the onset, and explained that while researching costs for building a multi-purpose soccer and lacrosse field himself, using an array of private contractors and California Recreation and Parks Association resources, he found prices landed in the $1.5-2 million arena.

The students at Samohi have needed a playing field for years, Brock added, explaining that the timeline could also be expedited to help the 3,000 students at the high school access sporting facilities in their schooling lifetime.

City staff told The Mirror that the estimates were from consultants RJM Design, and that parking study costs were fixed due to requirements set by the California Coastal Commission.

“Because the site is in the Coastal Zone, the loss of 600 spaces and the impact of the loss on the zone must be studied,” the City explained. Despite the south east corner of the Civic lot being almost always empty, the $250,000 study is essential, they said.

Additional options presented in the Staff Report including building a permanent field with one level of parking for $60 million, or a temporary field at Memorial Park for an unknown cost.

Of course, there is always the option to do nothing, and defer the decision until an RFP for the Civic Auditorium is issued.

The item is set for discussion during City Council’s Tuesday June 27 meeting at City Hall.