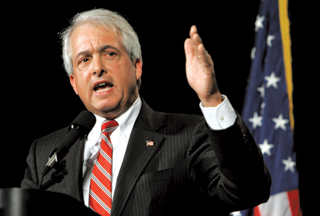 When all the votes have finally been counted, the total tally for the two major Republican candidates in this week’s California primary election run for governor likely will come to just over 35 percent of the total.

That’s the lowest percentage for the GOP in a seriously contested primary in modern history, and there’s a reason for it: Despite constant Republican rhetoric about this state’s decline and despite the echoes of President Trump in the vows of GOP candidates John Cox and Travis Allen to “Make California Great Again,” things are actually going pretty well here – at least for the vast majority of Californians.

Generally, when the economy is successful, challenges to the party in power can flop.

So it will almost certainly be a defeat this fall for Cox, a former Illinois businessman and peripatetic 12-time losing candidate there who beat out Democrat Antonio Villaraigosa and Orange County Assemblyman Allen for the right to run against Democratic Lt. Gov. Gavin Newsom this November.

With Republican voter registration now barely 25 percent of the total and actually third behind Democrats (45 percent) and those with no party preference (almost 26 percent), Cox will have a difficult task.

No California candidate has ever faced such a party-registration deficit and it isn’t because the GOP hasn’t tried hard. Over the last 25 years, the party spent millions of dollars on voter registration efforts aimed at whites, Latinos, Asian-Americans and African-Americans, with little or no success.

One result is the low percentage of votes for the party’s major springtime candidates for governor.

The reasons for it include California’s economic performance, which belies Trump’s labeling this a “failed state.” Simply put, reality is the opposite.

Yes, as Newsom said in a springtime interview, this is both America’s richest state and its poorest. But the election results demonstrate the poor have no faith Republicans will solve their problems, while the well-off are satisfied with the party that’s at least partly enabled them to achieve that status.

California is doing well by almost every measure. The latest ranking by the often-cited Wallethub website of the best and worst state economies in the nation – out early this month – placed California in fourth place, contrary to GOP rhetoric that routinely calls this a rotten place to do business.

California had the fifth-most start-up businesses in America over the last year. It tied Massachusetts for the most independent inventor patents per capita. It ranked among the lowest in unemployment. That was just one ranking system.

Perhaps the most important ranking for California came when it surpassed the United Kingdom and France for the first time ever to become the world’s fifth-largest economy (behind only the overall U.S., China, Japan and Germany) with a gross domestic product of more than $2.7 trillion, an increase of $127 billion over just the last year.

The rise in gross domestic product put California’s pace of growth far ahead of low-tax states like Texas and Florida, which style themselves as the wave of the future and California’s chief rivals. Economic and job growth has far outstripped the nation as a whole, accounting for the lion’s share of national growth.

It’s hard to see how Trump, who says his decimating of federal regulations has created economic growth, can try to make the same claim about California, which is fighting most of his changes.

This all trickles down, as the conservative economist Arthur Laffer (a former Californian) might say. It even trickles into the voting booth.

Essentially, the party registration figures and the flight of onetime Republican voters into both the no-preference and Democratic columns are the result of Democratic successes with the state economy.

Cox will surely keep arguing that things are terrible. As a challenger of the status quo, he needs to do that. But barring a sudden collapse that could be blamed on Democrats, he’s unlikely to have much more success in the fall than his party did this spring.