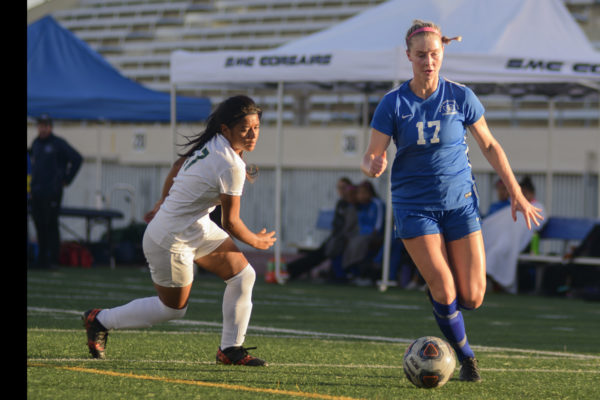 This past week, the women took on Victor Valley College and LA Valley College and picked up two victories to improve to 8-1 on the season with four draws. With these victories, the Corsairs have gone now a month without dropping a game, dating back to September 11 when they lost versus Santa Baraba City College.

On Friday, October 5 the women traveled to Victor Valley College and picked up a 7-2 win. The Corsairs got off to a fast start, scoring three goals in the first ten minutes of the game, with two of these coming from Filippa Struxsjo. By halftime, the Corsairs found themselves up 5-1. With two more goals in the second half, the women showed why they have been the team to beat this season.

On Tuesday, October 9, the Corsairs were right back at it with a home game versus LA Valley College. In a contrast to the scoring fest versus Victor Valley, the game versus LA Valley showcased both of the teams’ defense. SMC only scored one goal, Filippa Struxsjo in the 31st minute, but with stellar defending, this was all the women needed to pick up their eighth win of the season.

Up next for SMC is an away game on Tuesday, October 16 at LA Pierce College.