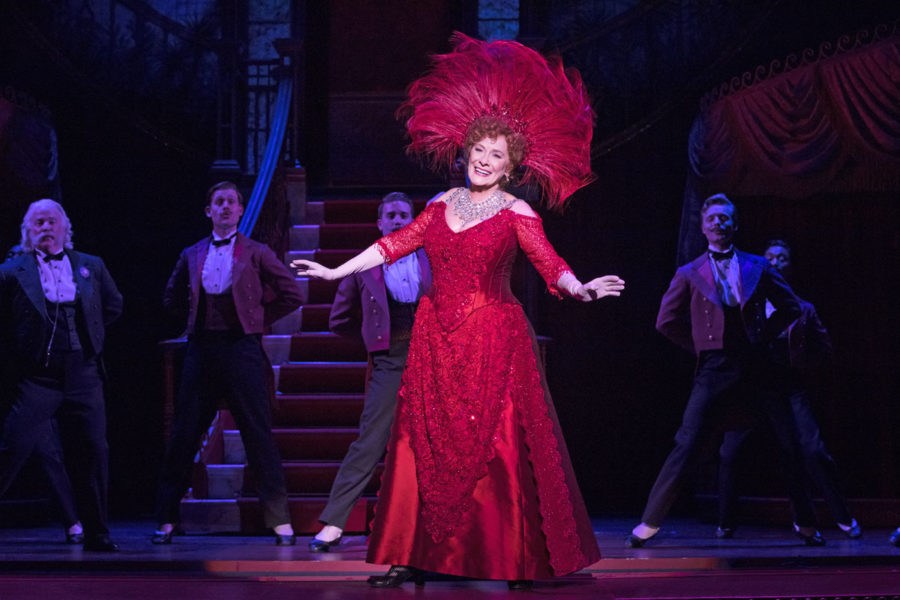 Don’t send me hate mail for saying this, but Betty Buckley as the latest Dolly Gallagher Levi, the quintessential meddling yenta and one of the most iconic characters in American Musical Theatre, is not quite up to the same level of performance as most of her predecessors, including the one and only Carol Channing, who starred in the original 1964 premiere, produced by David Merrick and choreographed and directed by the extraordinary late Gower Champion.

Homage to his distinctive work is on display by choreographer Warren Carlyle, who captured Champion’s highly stylized movements, adding his own bells and whistles to the quirky dance sequences. The original play closed in December 1970 after 2,844 performances. Other Dollies include Mary Martin, Ginger Rogers, Pearl Bailey, Ann Miller, Ethel Merman, Angela Lansbury, Barbra Streisand, Bernadette Peters, and Bette Midler, who starred in the recent Broadway revival, breaking box office records and honored with four Tonys.  Let me hasten to add, however, that despite some vocal and physical limitations, Buckley’s bigger-than-life presence gifted the opening night audience with a crowd-pleasing performance.  Under the tight, masterful direction of Jerry Zaks, who helms the first national tour, this latest “Hello Dolly” is a literally a feast for the eyes as the stage explodes in a profusion of rainbow-colored, gorgeous 19th century costumes and playful, eye-popping sets by Santa Loquasto, wonderfully enhance by Natasha Katz’s lighting design and Scott Lehrer’s sound.

For anyone not familiar with the story line, it goes like this. Based on Thornton Wilder’s play “The Matchmaker,” the action takes place in New York City in the 1880s.  Widow Dolly Gallagher Levi is up to her usual matchmaking services and is hired by the not so lovable Horace Vandergelder, a “half-a-millionaire” cantankerous Yonkers hay and feed store merchant, played by Broadway pro, Lewis J. Stadlen, who uses a bag of tricks and shtick, which is appropriate for his overall broad acting style.  However, this is contrasted by Buckley’s more naturalistic approach, which makes the two differing acting styles a bit incongruous.  This quite unlovable dude wants to be set up with New York milliner Mrs. Irene Molloy, played by Analisa Leaming. However, the plot thickens when Dolly decides she wants to be financially secure and schemes on how to get this rather nasty man to marry her.  After having a loving marriage with her late husband Ephraim Levi, who she freely calls upon for advice, why, you might ask, would she want to be with this creep?  Money.  It’s all about money and she sums it up with:  “Money, pardon the expression, is like manure. It’s not worth a thing unless it’s spread around, encouraging young things to grow.”

In the meantime, Vandergelder’s always loudly crying niece Ermengarde (Morgan Kirner) is madly in love with Ambrose Kemper (Garett Hawe) who her uncle does not approve of, yet.  Spreading his nastiness to his two overworked and underpaid employees, Cornelius Hackl (Nic Rouleau) and Barnaby Tucker (Jess LeProtto,) they decide to escape for a day and pool their pitifully low resources and head to New York for fun.  They wind up in Mrs. Molloy’s hat shop where Cornelius becomes smitten with her and Barnaby falls head-over-heels for her assistant, a zany Minnie Fay (Kristen Hahn).  Cat-and-mouse hi-jinx begins as the two potential suitors hide from the old geezer who has come by the store to meet the woman he intends to marry.  Akin to a French farce, the two young would-be lovers hide in either the closet or under a table, which Mrs. Molloy insures that no feet are protruding out.  But never fear the right coupling eventually emerges.

Under Zaks’ splendid direction, aided and marvelously abetted by David Chase’s dance arrangements and Don Pippin’s vocal arrangements, every production number is superb beginning with the opening song, “I Put My Hand In” performed by Dolly and Company, which takes place on Fourth Avenue in New York City.  Other songs that you will surely remember include, “It Takes a Woman,” sung by Vandergelder and the Instant Glee Club, “Put on Your Sunday Clothes” performed by Cornelius, Barnaby, Dolly, Ambrose, and Ermengarde, the sweet “Ribbons Down My Back” sung by Mrs. Molloy, “Motherhood,” sung by Dolly, Vandergelder, Mrs. Molloy, Minnie Fay, Cornelius and Barnaby, and of course, the most memorable “Before The Parade Passes By,” with Dolly and the amazingly talented company.  The showstopper takes place inside the Harmonia Gardens Restaurant, where Cornelius and Barnaby, with a very limited budget, have taken the two girls out to dinner.  “The Waiters’ Gallop” is an extraordinary production number with the dancers performing unbelievably complicated movements, balancing trays as they move through their paces in lightening speed.  It truly is a showstopper.  Speaking of a showstopper, yes there is Dolly’s descent down the staircase attired in a vibrant red costume and matching headdress and following wild applause, we hear the signature song “Hello Dolly” during which one couldn’t help remembering Louis Armstrong’s recording of that tune.  As you might have guessed, that unforgettable song is reprised at the end of Act II, with a rousing finale by the entire company following which the audience sprang to its feet cheering wildly for the theatrical spectacle they just witnessed.  So, while Buckley might not be the strongest Dolly ever, she more than delivered the price of the ticket.

By Beverly Cohn February 13, 2019
in Life and Arts
Related Posts