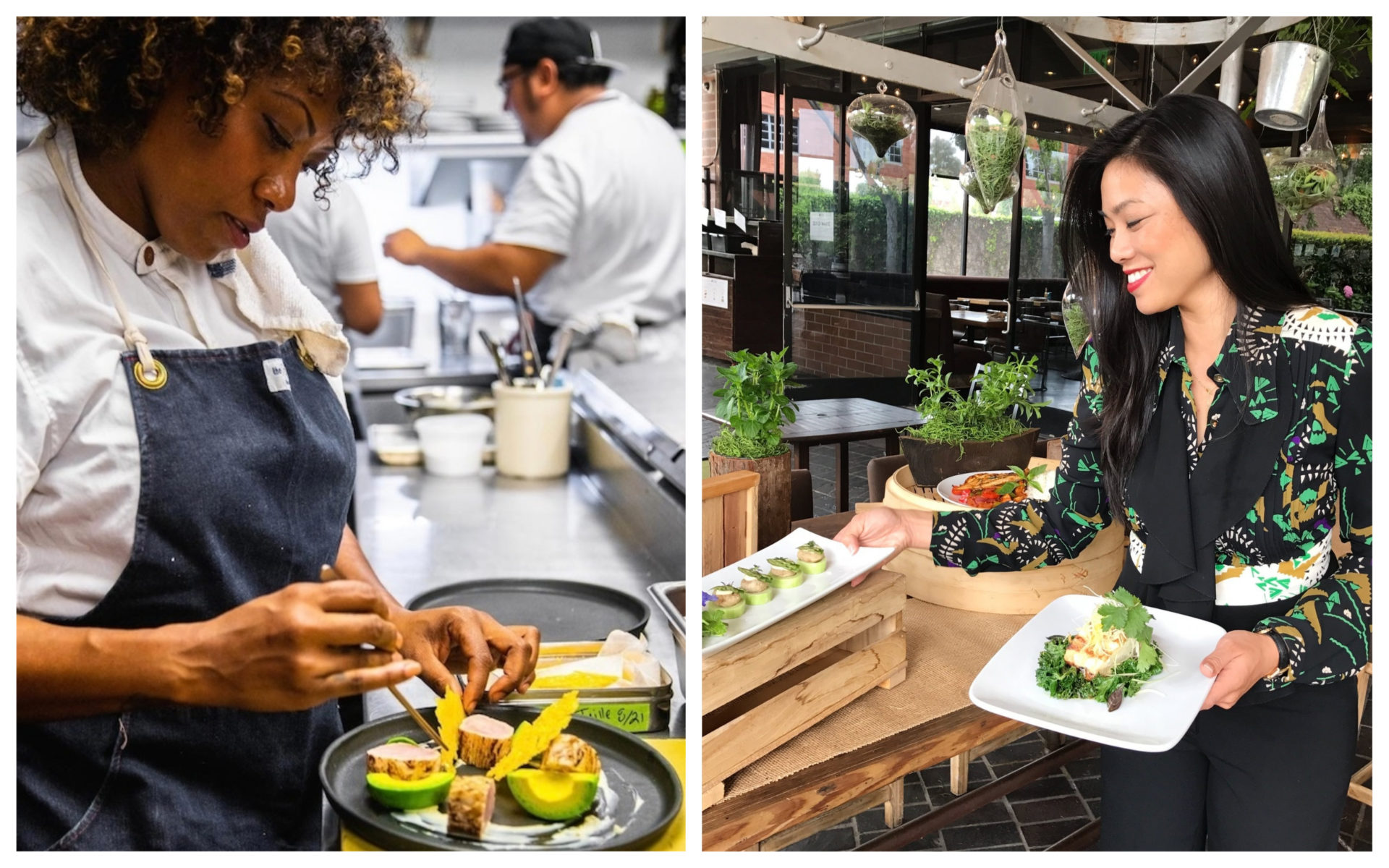 We’ll be celebrating Santa Monica’s special women all month!  Our City is home to some of the most renown culinary establishments in the country.  In particular, two highly-rated restaurants are “manned” by women chefs and managers.  We highlight these women today, and will profile others during the month of March.

Chef Nyesha J. Arrington has been in love with the kitchen since she was just a little girl, cooking from the age of five alongside her Korean grandmother. Born in Los Angeles to a multicultural family, Arrington integrates flavors and techniques from around the world, and has been able to create a style that is both personal and unparalleled at her restaurant, Native. Arrington is celebrated for her use of farm fresh, locally, and responsibly sourced ingredients. She has spent nearly every Wednesday of her last 17 years as a chef at the Santa Monica Farmers Market, just steps away from Native.

“Every plate is like a canvas,” Arrington said. “Chefs must be able to control brain function like no other, including everything from organizing their prep, to assessing the menu and knowing their audience. I love the process.”

A graduate of the Culinary School at the Art Institute of California in Los Angeles in 2001, Arrington’s work began with Josiah Citrin, owner of acclaimed Melisse restaurant in Santa Monica.  Later, when she was Executive Chef at Wilshire restaurant in Santa Monica, she was named a Rising Star Chef by Angeleno Magazine. In 2011, Nyesha appeared simultaneously on two reality-cooking shows as a contestant – Top Chef and Food Network’s series, Chef Hunter, where she won the competition. In 2012, Nyesha was recognized by Zagat as one of the 30 best chefs under 30 in Los Angeles.

Her dining room is a sexy-cool space, part industrial, part-speak-easy.  I was there a week ago with a friend and indulged in the best grilled Spanish octopus I have ever tasted, served with corn nuts, labneh and cilantro. We also shared a sweet-potato tortellini with cashew dukkah, turmeric milk and za’atar.

By the way, labneh is yogurt that has been strained to have the consistency of soft cheese and dukah is an Egyptian condiment consisting of a mixture of herbs, nuts and spices.  Za’atar is a family of related Middle Eastern herbs.  All are amazing.

Chef Arrington glows.  Her cuisine is a cut above most in Santa Monica.  She loves what she does and it shows.  My recommendation:  Go!  It’s a Santa Monica treasure you must experience.

Helene and Catherine An – Tiato

The An family story reads like a modern day fairytale. It is a story about three generations of strong-willed women from Vietnam who rose from the devastating loss of home and country with the fall of Saigon to their relocation to America and building a multi-million dollar food and hospitality empire.

Helene An, matriarch of the An Family and executive chef of all An family restaurants, spent much of her free time as a child in the kitchen with her family’s three chefs of Chinese, French, and Vietnamese descent, absorbing their cultural differences and culinary techniques, thus enabling her to develop her personal “Ying and Yang” culinary philosophy of healthy and balanced eating.

Tiato’s owner, Catherine (daughter of Helene An), continues the legacy of her mom.  She chose to name the restaurant Tiato as an homage to her family’s rich heritage. The name is a play on the Vietnamese herb tía tô, a favorite ingredient of both Catherine and her mother. With her mother’s help, Catherine developed a simple menu of sophisticated, global tastes, rich in antioxidants and organic, immune-boosting ingredients.

Tiato features many items that honor her mother’s cooking philosophy: One should eat what tastes good and is healthy. Catherine believes that part of keeping in balance is letting yourself indulge a little too, which is why you’ll find scrumptious treats like Gluten-Free Brownies and savory dishes like Grilled Cheese Sandwich and Tomato Bisque alongside health-conscious options.  Delicious. My favorites. I like Catherine’s philosophy.

“Eating right is about eating a meal that makes you feel good. We provide a thoughtfully balanced, appetizing menu of carbohydrates, proteins, healthy fats and vegetables, with indulgent items featured as well. The balance of these elements in our food is an expression of how committed we are to providing nourishment that balances the body, mind, and soul,” said Catherine.

For a taste of a multi-generational women’s dining dynasty, Tiato is the place for an unforgettable experience.

By Barbara Bishop March 9, 2019
in Life and Arts
Related Posts