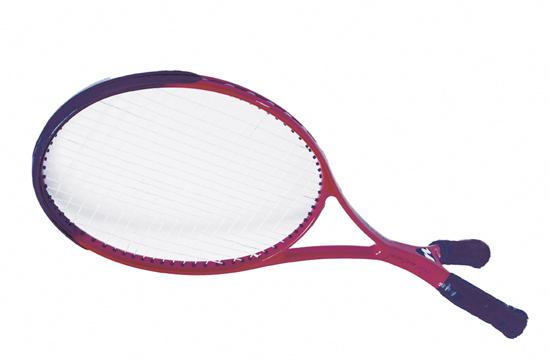 “For the health of it!” answered the inventor. But I didn’t quite get it.

Burt reminded me that a standard handled racquet is usually played with a forehand on one side and either a single-handed or two-handed backhand on the other side. He went on to describe how the modern, open-stance, power game will find a right-handed player standing mostly on the right leg for a forehand and standing on the same right leg for a backhand.

So, not only is tennis a lop-sided upper body work-out, it’s also a lop-sided lower body work-out. Burt chided that nobody in their right mind would go to a gym and work out that way “and any trainer that would suggest an off-court, lop-sided regimen like that as a healthy work-out would likely be sent packing, boom box, and pink slip in hand.”

In a tone similar to a lawyer resting his case, Burt added, “So, tennis is taught and played in a one-side dominant style.”

Burt produced a list of 42 top-level tennis players who have had persistent serious back problems throughout their careers, many of them having to resort to surgery. Among the list are names like Andre Agassi, Pete Sampras, Jimmy Connors, James Blake, Roger Federer, Taylor Dent, Tommy Haas, Lleyton Hewitt, Gustavo Kuerten, Steffi Graf, Tracy Austin, Lindsay Davenport, Justin Gimmelstob, and many others.

An orthopedic surgeon who is a consultant to the Countrywide Classic Tennis Tournament reports: “neck and back pain is almost universal among tennis players.”Because tennis is not a “contact sport” players are not injured by an opponent. They are injuring themselves as the result of the unbalanced nature of the present style of play, namely lop-sided. A style of play that allows and encourages one to play symmetrically on both sides of the body is the healthiest method, especially for younger players. According to Pat Etcheberry, a world class tennis trainer: “any time you have an imbalance between muscles, you’re asking for injury.”

The USPTA has initiated a major campaign under the banner, “Tennis for the health of it.” Although it pertains to all players, the campaign focuses mainly on kids and the incidence of childhood obesity.

If the Federal government’s Occupational Safety and Health Administration had jurisdiction over tennis academies they would be issuing citations all over the place. The arched back, twisted spine serve would be enough to shut the place down.

There is a way to fashion a stick with a stringed head on the end in such a way it conforms more harmoniously with the way a healthy young body functions. Take a look in any hardware store: All the tools that either exert force through the hand and arm, or absorb it from a powered source, are either pistol-gripped or off-set.

Companies have spent millions of dollars on studies to find out how to prevent injuries in workers who do repetitive tasks using their arms and legs (like tennis players). They have come up with a simple slogan; “Bend the tool and not the operator!”

The idea of having the handle of a tennis racquet in direct line with the racquet face is an idea that was hot in the 16th century when King Louis XIII was on the Davis Cup team. But now it’s just antiquated. In those days gentlemanly aristocrats wearing powdered wigs and shirts with frilly shirtsleeves politely bunted a fuzzy spheroid back and forth in a courtly, civilized fashion.

Today, tennis is played in a much more athletic and aggressive fashion, which makes it harder on the body, especially a twisted body. As the manner of playing evolved, the size of the racquet-head is larger now, the exotic graphite materials in the frame make it lighter in weight, and the synthetic strings have greater bounce. Despite these changes, the basic handle-to-head relationship has managed to avoid any advances in technology.

The double handled racquet it is not only healthier for the body, but it also had a hand in some impressive statistics:

•13 Open Championships in California in 2007

• 45 and over National Champion

• Challenger Pro Circuit ranked in the Top 10 Doubles teams in the U.S.

Even if you are not a tennis player, you probably heard about the epic 11 hour match this year at Wimbledon between 6- foot-10-inch John Isner of the U.S. and Nicolas Mahut of France. Ambi-players Brian Battistone, 6-foot-3-inch and his 5-foot-9-inch brother Dann, beat Isner and Rajeef Ram, his 6-foot-5-inch doubles partner two weeks in a row for the Championships in Sacramento and Calabasas. Think about David and Goliath: this is a testimonial to how the racquet works in returning 140 M.P.H. serves.

The racquet with the healthier design features allows a player to use both sides of the body in a mirror-image, balanced, bilateral manner. This is not only a healthier way to play, it is an advantageous way to play. The power, reach and spin that can be imparted to the ball as a result of the angled-grips are something that must be seen to be fully appreciated.

Anyone who wants to see it can check it out most week-day mornings at 8 a.m. at the Ocean View tennis courts in Santa Monica, where coach and racquet inventor Lionel Burt and his star pupil, Brett Friedland, a 14-year-old Santa Monica resident, will be doing some wham and bam until 10 a.m. Brett has been playing for about three years and he still has a healthy spine thanks to his “both sides even” work outs.

A word of warning: don’t make any jokes about the racquet looking like hedge clippers or a divining rod. Burt is a former gag writer for stars like Red Skelton, Debbie Reynolds, Phyllis Diller, and a lot of other dead people. There’s no subtly derisive put-down of the racquet that he has not heard.