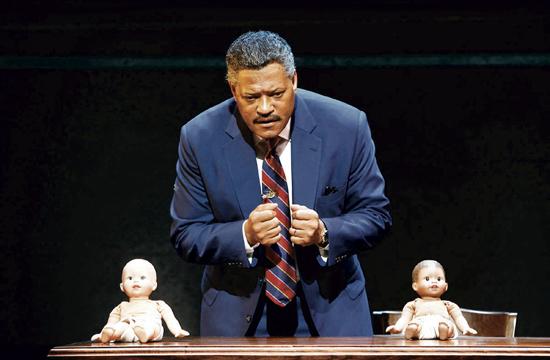 Laurence Fishburne’s award-winning acting credits are too voluminous to list, but certainly one of his seminal roles was that of Morpheus in the Matrix film series. That said, reprising his role as the iconic jurist Thurgood Marshall, earns Fishburne a place as one of America’s most treasured actors. His dazzling characterization has already earned him a Drama Desk Award, an Outer Critics Circle Award for outstanding solo performance, and a Tony nomination for best performance by a leading actor.

This powerful play, written by George Stevens, Jr., and directed with the utmost of delicate skill by Leonard Foglia, is a 95-minute monologue and was recently performed at the John F. Kennedy Center for Performing Arts in Washington D.C., the sets of which were moved to California lock, stock, and barrel.

We first meet Thurgood as an old man in the Howard University Law School Auditorium. He begins to tell his story, a roller coaster ride back to his childhood, tracing the people, places and events, including the seminal 1954 case Brown v. Board of Education challenging the Separate But Equal Doctrine, that led up to his becoming the first African-American Supreme Court Justice. Fishburne limps on stage with the help of a cane, his vocal and physical interpretation befitting a man of advanced years and in short order, it becomes apparent that he has crawled into the heart and soul of the masterful Civil Rights advocate.

As a young boy, his blue-eyed father would take him to court so he could hear the proceedings, followed by lively, heated discussions at home. Marshall muses, “I had this habit of always saying what was on my mind.” In his college days at Howard University he was somewhat of a ladies man, confessing, “I was pinned to seven coeds at the same time.”

As Fishburne moves through the various phases of Marshall’s remarkable life, he captures the subtle vocal and physical changes of his character. Again, with restrained, but brilliant direction by Stevens, Fishburne creates an entire cast of characters – his mother, father, his girlfriend Buster, who becomes his first wife, Supreme Court justices, southern judges, his teachers, close friends, etc., endowing each of the characters with their own physical and vocal signatures. Particularly clever was the use of his jacket as a prop which, when removed or put back on, signaled yet another legal confrontation – subtle, but an effective stage craft.

Told with a combination of pathos and humor, we hear stories about Thurgood’s drinking and his days as a waiter in a private club where he was constantly called the “N” word, but because he was getting a $20 tip after each meal, he made up his mind not to fight until the tips disappeared, much to his father’s chagrin. Fishburne’s Thurgood recounts his experience as a waiter on a train in a “Whites Only” section and we get a glimpse of how he withstands humiliation with wit and a driving determination that propels him forward to challenge the unjust laws of the land.

We relive his mother’s experience as a schoolteacher whom, unlike the white teachers, was forced to scrub her classroom floor at night, and his terrifying near-death experience when friends rescued him from being lynched in a field by a mob of rednecks. He retells his confrontations with General Douglas MacArthur over segregated “Negro” soldiers during World War II, and with each fascinating story Fishburne’s grip on the audience tightens.

Thurgood talks about his relationship with Martin Luther King, who preached civil disobedience whereas “I decided to fight my battles in court.” “… I recognized the power and the majesty of the law… [and] used the law as a weapon.” And so he did, including winning the landmark case, which we hear him argue before the Supreme Court, on how the 14th amendment contradicts the Separate But Equal Doctrine. The court held, “The Doctrine of Separate But Equal has no place in American life.”

Whenever there was a legal issue to confront, Fishbourne would put up his fists in a playful boxing gesture saying, “We decided to take it to court.” He does a good Lyndon B. Johnson as he relives the compelling moment when Johnson appointed him Solicitor General of the United States, making him highest-ranking “Negro” in the U.S.

An exciting technical team supports Thurgood, beginning with the very effective set design by Allen Moyer, light design by Brian Nason which choreographed the scene transitions, and a very special projection design by Elaine J. McCarthy, who fills the upstage wall with compelling, oversized pictures that support the different locations of the stories being told, such as the inside of a train, the Supreme Court, pictured with two giant marble pillars, the interior of a schoolroom, the Lincoln Memorial, images of the KKK, the interior of the exclusive club depicted by a giant chandelier, and a shanty where we are told a little boy eats his first orange.

The extended standing ovation paid tribute to Fishburne’s tour-de-force, masterful performance, one of the most spelling binding to grace the Los Angeles stage.