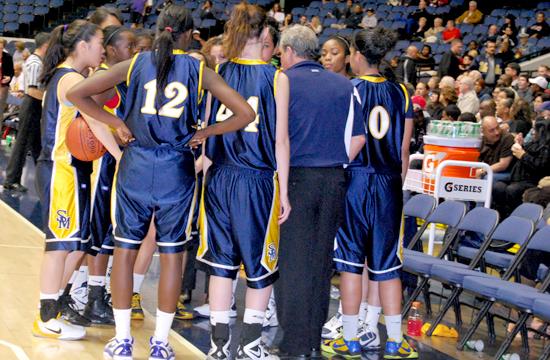 ANAHEIM – The ladies of Santa Ana Mater Dei were just too big.

Santa Monica High School’s girls’ basketball team will not be crossing the street from Anaheim Arena to Disneyland or California Adventure because it fell short against a taller Mater Dei opponent in the semifinal game of the CIF Southern Section Division 1AA playoffs on March 1 here in Anaheim, as the Lady Monarchs defeated the Lady Vikings, 57-37.

The game was seemingly over in the first quarter, as the Lady Monarchs jumped to a 13-2 lead after applying an intense defensive full court press on the Lady Vikings, preventing Samohi from setting anything up on offense in the initial frame.

Down 23-7 midway through the second quarter, Samohi finally rebounded missed shots, picked up loose balls, and forced turnovers on defense as it closed the half on a 12-5 run.

The run was extended to 16-5 as Samohi’s momentum carried over into the second half, with the Lady Vikings cutting the Lady Monarchs lead to five points, 28-23, with 5:36 remaining in the third quarter.

Samohi struggled to convert key shots the rest of the way, as Mater Dei pulled away to defeat the Lady Vikings and advance to the Division 1AA Finals against Brea-Olinda, the nation’s top-ranked team.

“It has been a dream season, this game will in no way tarnish it,” Samohi head coach Marty Verdugo said. “We tried a little too much individually (early on), then settled down … (but) we just couldn’t close. Their size and their strength just wore us down at the end.”

Senior Samohi guard Kristina Johnson, who is headed to the University of the Pacific, led the Lady Vikings with 12 points.

Still, Samohi’s season is not over, as the Lady Vikings qualified for the state playoffs commencing on March 8; the Southern California championships are held on March 19 at USC’s Galen Center and Ontario’s Colony High School, while the State Championships take place on March 25 and 26 at Sacramento’s ARCO Arena.

Also losing in CIF-SS playoff action was Samohi’s boys’ soccer club, who lost to Oak Hills, 4-0, in the Division 4 quarterfinal match; it was the Vikings’ first loss of the season.