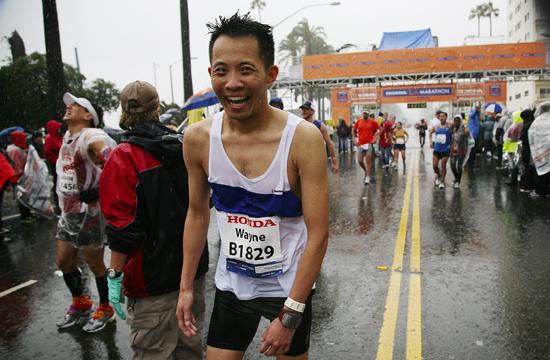 Torrential rain, gusting winds, and unseasonably cold temperatures during the March 20 LA Marathon posed unique challenges not only for the 19,000-plus runners, some of whom battled cramps brought on from the cold and even hypothermia. The weather conditions also posed a challenge for the medical teams waiting at the finish line to take care of those runners.

UCLA Health System served as medical provider for the LA Marathon and staffed three medical stations beyond the Santa Monica finish line. The medical station located within the Finish Line Festival Area, which itself was located in the vacant lot that formerly housed the RAND Corporation’s headquarters and is planned to become Santa Monica’s six-acre Civic Center Park. This area is bounded by Main Street and Ocean Avenue on the east and west respectively, across from City Hall.

This site was changed from the space chosen for last year’s finish-line party, which was held in the parking lot next to the Santa Monica Pier on the beach. Last year’s site was difficult to access by any other way than walking down the pier itself, which was blocked off from anyone not associated with the marathon. Many spectators either walked several blocks downhill to the beach and then ventured back north or simply dangerously waded through the oncoming traffic of the Pacific Coast Highway.

This year’s vacant lot location was seen as a better, more accessible location than the pier’s beach parking lot – until it flooded from Sunday’s monsoon. Team members worked quickly and collaboratively with Santa Monica firefighters and City officials to create a makeshift MASH unit on Big Blue Buses, the city’s bus fleet system.

“When our tent started flooding, the first thought was to relocate it,” said Timothy Van Pelt, UCLA’s nursing team leader at the station, located near Ocean and Colorado Avenues. “Then we realized that there were all these heated buses sitting idly nearby, so why not use them instead?”

One bus was designated for females and another for males because many of the runners were soaking wet and needed to remove their clothing to be treated for hypothermia. Blankets not only helped warm runners, but also served as privacy curtains.

Other buses were used as warming stations for dozens of shivering runners suffering from mild to moderate hypothermia. Runners who simply needed to keep moving to prevent cramping were instructed to walk up and down the bus aisles.

Nurses used the handrails inside the buses to hang IV bags for those runners who required intravenous fluids for dehydration. “It really reminded me of a MASH unit,” said Edith Matesic, director of nursing at Santa Monica-UCLA Medical Center and Orthopedic Hospital, who served as site captain.

“We prepare for all kinds of scenarios at our hospitals through regular disaster drills, which really paid off in this situation,” she continued. “When we needed to improvise, our staff responded without hesitation.”

Flexibility was a recurring theme throughout the day. When it became apparent that UCLA’s medical stations would become inundated with runners who simply needed a place to dry off and get warm after finishing the marathon. With the help of the American Red Cross, the City of Santa Monica Emergency Preparedness Office, and Santa Monica Fire Department, hospital officials sought assistance from the nearby Fairmont-Miramar Hotel.

Posie Carpenter, Santa Monica-UCLA’s chief administrative officer and lead person for the medical team, asked the hotel to provide a room where runners could gather to warm up. The hotel responded by making a ballroom available. Hundreds of runners gathered there for comfort, fluids, and energy bars before heading home. Other hotels on Ocean Avenue also opened their doors to runners.

“The Fairmont and other hotels responded like the great community partners that they are,” said Carpenter. “Their assistance was instrumental to our flexible and highly collaborative efforts to take care of the runners.”

Equally important was the help from other area hospitals, the American Red Cross of Santa Monica and the Salvation Army, which provided badly needed blankets when the Mylar wraps provided by marathon officials proved ineffective in warming runners.

The Santa Monica Red Cross handed out almost 400 thermal and/or cotton blankets under the leadership of the chapter’s AmeriCorps volunteer Jonathan Quintana and four regular chapter disaster volunteers who were called in to render assistance on an emergency basis.

“This was a massive undertaking involving a huge commitment of resources and personnel from throughout our health system,” Carpenter explained. “Under the worst of conditions, our team demonstrated the best of community service. I’m incredibly proud.”