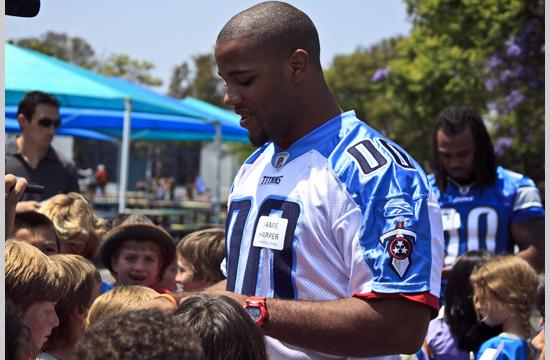 SANTA MONICA – All 308 pounds of Buffalo Bills defensive tackle Marcell Dareus stepped from the street to the curb at Grant Elementary on Friday.

“What’s going on, my man?” Newton asked with his trademark smile before Friedenberg could get out a hello.

“Not much, man,” Friedenberg said.

Luckily, for Friedenberg, 6-7 New England Patriots quarterback Ryan Mallet was still on the street when he said, “Welcome to Grant School!” so he could look in Mallet’s eyes before the quarterback’s head distanced itself from Friedenberg’s.

Grant Elementary hosted 14 NFL rookies on Friday. The athletes went to classrooms to take questions from the media and from the students before taking Grant’s football field and running the kids through drills like hula-hoops, jump ropes and cones.

And Dareus revealed two truths to his class which made him a favorite. He has two pets: a python named Spike and a chihuahua named Sassy. Leshoure, who was in the same class with Dareus, just shook his head and whispered to the kids on his side, “I don’t like snakes.

“This just reminds me of the way it used to be back in the day,” Leshoure said. “I see these courts. I used to play kickball, and seeing these kids, it’s the same thing with these kids. It feels good to give back and encourage these kids that they can do the same things we’re doing.”

When the players were taking a break from the physical activity, they signed autographs for the kids with whom they were just playing.

After doing some preliminary stretches, Miami Dolphins running back Daniel Thomas was surrounded for the third time of the day with students asking for his signature. As he signed, he showed his skills in public relations.

“That’s Cam Newton over there.”

But Newton was busy doing calisthenics with his own group. Asking the kids to yell when they reached the top of their sit-ups. Newton didn’t just show his craft for playmaking but also picture-taking. Before the drills began, he grabbed a camera from one of the crew documenting the event and took stills of the kids.

“I think with everything that goes on in school that is serious,” Friedenberg said, “it’s nice, once in awhile, to do something (that is) completely opposite that is just an amazing event. I don’t think the kids will ever forget this day.”