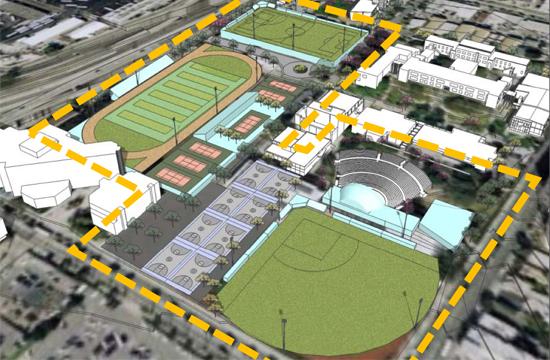 Santa Monica High School (SaMoHi) is about to undertake a major reconstruction of its campus and athletic facilities, and the football field is only a small part of the change. The renovation will see the campus become a modern academic institution and a major sports facility in the city. Santa Monica athletes and officials see the new fields as a chance to alleviate an overwhelming public demand for field space in the city.

This proposal from the Santa Monica-Malibu School District (SMMUSD) to get started right away on the football field, though separate, is a part of the larger $234 million construction project that was approved by voters as measure YY and Y, adding a half-cent use tax to pay for it. It also stipulates that half of the revenues raised by the use-tax would go directly to the school district.

Phase one of the plan calls for spending $57 million to improve the athletic facilities on the SaMoHi campus in return for public access. It includes the demolition of the existing SaMoHi South Gym, replacing it with a new 33,000 to 54,000 square foot facility with three basketball and volleyball courts, a dance room, yoga rooms, a fitness gym, and pep studios. It includes support amenities such as restrooms, showers, dressing areas, and spectator accommodations. Phase one also includes the construction of a new softball field, baseball diamond, and tennis courts.

With pressure mounting from Santa Monica residents and sports organizations for sports fields, Santa Monica-Malibu School District and the City have agreed in principle, but are still negotiating the details to grant public availability to the SaMoHi football field during non-school hours through the parks and recreation commission. It is an agreement that must be approved by the city council and requires the field to be resurfaced with artificial turf instead of sod. School district and City officials are working together to structure a plan to use redevelopment funds to complete the work.

“It’s a fantastic proposal that calls for the immediate resurfacing of the SaMoHi football field and completing it within 8 to 10 weeks and thereby increasing the available time for playing fields in the city by 40 extra hours a week,” said Richard McKinnon, a parks and recreation commissioner.

While the agreement helps the city fulfill the public demand for fields, the district would also benefit by being able to use redevelopment agency funds instead of taking them from the “Civic Center Joint Use Project.” Although the Civic Center project does fund the same construction for a mix-use field that employs artificial turf similar to those at Santa Monica College and John Adams Middle School, the district would prefer to save the $1.5 million.

Redevelopment funds are to be used only for capital improvements, which do encompass the football field upgrade, while the funds in the civic center project come without any restrictions on how they may be used. It will enable the district to save the $1.5 million from the civic center project and use it for hiring and programs that are not necessarily construction or capital improvement.

McKinnon couldn’t stress the importance of the proposal by the district to offer the SaMoHi football field asset and what it means to the City of Santa Monica. He explained that in the past two years there has been an enormous increase in the demand for playing fields, and the pressure on parks and recreation, which schedule facilities, has been overwhelming. It is directly related to the lack of field-space in the city and the continuing increase in the numbers of organizations and individuals who participate in field sports.

He explained that because of the lack of fields, people are willing to use the existing fields at all kinds of hours to play their games – starting at 6 a.m. until midnight. But the existing fields cannot support the demand, regardless of peoples’ willingness to use them at all hours in the day.

“Santa Monica High School’s field is basically underused and, when considering its size and the lack of area in our city, being able to add it to our inventory of useable fields will considerably increase our ability to satisfy the demand,” McKinnon said. “It’s a trade off; artificial turf for more exercise.”

SaMoHi’s football field and track take up a very large area in one of the busiest parts of the city, but it is hardly used because the sod field cannot support activities beyond what it already supports.

“The artificial turf will change that and make it possible for greater public usage,” said Carey Upton, the school district’s director of theater operations and facility permits.

Currently there are several facilities in which the district and City have a joint-use agreement, such as the use of the SaMoHi South Gym twice a week for adult basketball. Volleyball and the tennis courts are permitted to tennis teachers, tournaments, and public use. There is also the John Adams Middle School field that is shared by the district and City. The shared relationship has proven to work well, and Upton feels it would not be any different for the new field at SaMoHi.

The Santa Monica City Council has already approved the $1 million expenditure for the environmental impact review that is required to be conducted before a project of this size may receive final approval. Once completed, City officials expect to approve the first phase. On May 26, the city council will receive a report from City Manager Rod Gould detailing the status of the negotiations between the City and District to use redevelopment funds for the field, as well as the status of the Civic Center Joint Project.

“We hope to get started on the new field in June and have it completed before the start of the high school football season this fall,” Upton said.

Outgoing Superintendent Tim Cueno didn’t feel as confident that the project would be completed that quickly based on what he has been told about the complexity of resurfacing a football field. He did say he believed it would be completed by spring 2012.

Cueno said he expects the agreement between the City and school district to receive final approval from the City Council by the end of June, which will then allow the plans for resurfacing the field to begin.

McKinnon said the project will pay off.

“I can’t tell you what this will mean to the city and its residents and organizations,” McKinnon said. “It is a very exciting and positive small step forward that will make quite a difference while the larger plan gets underway.”

All are fully prepared to spend the $1.5 million of redevelopment funds and to give the City an immediate uplift in its available field usage.

In the short term, the work to the field will satisfy the demand but it will also mark the beginning of tremendous improvements coming to the athletic facilities and the future of SaMoHi and the City of Santa Monica.