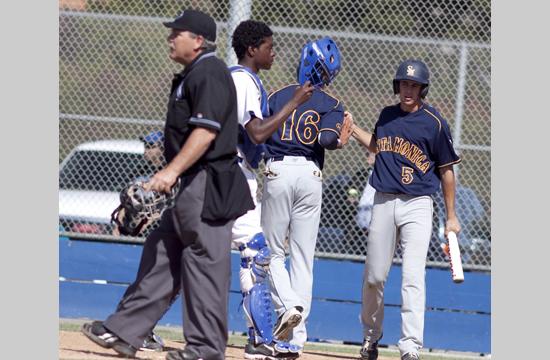 CULVER CITY – The day began with a coin flip.

Culver City and Samohi were both undefeated in league play heading into Tuesday’s game. The coin flip was to determine which team would be given the league title if the two teams finished in a tie. Culver City won the flip.

But then they played the game.

Samohi junior Adam Padilla kept the Vikings in the hunt for the League championship with a gem of a game from the mound and the 2-1 win. Pitching all seven innings, he gave up just three hits, allowing just one run, and kept the Centaurs’ hitters off balance all game.

“Adam pitched really well, but our defense was great behind him,” said Samohi coach Sheldon Philip-Guide. “Guys were making plays, they weren’t rushing – just letting the game come to them.”

Philip-Guide said that he was glad to get the first game on the Centaurs’ field out of the way. He made the decision before the game to tell his team about the coin flip going into the game. He felt by giving the team this information it would give them added incentive to win the game that Culver City did not have.

“I wanted the team to know what we were facing. I think it helped us play with a greater sense of importance to win this one. I think it worked and now we play the next one on our field.”

Culver City’s Tyler Mark allowed just two runs (one unearned) on only three hits and struck out five in seven innings. But it was the two errors by the Centaurs’ defense that resulted in two scores that would be all that the Vikings would need to win.

In the first inning, it was an error by the Centaur shortstop that put leadoff man, sophomore Alex Turner on first base. He stole second and then went to third on a sacrifice bunt by sophomore Leno Lares. Turner was then driven home on a clutch base hit by senior Matthew Stancil giving the Vikings a 1-0 lead.

It remained that way until the fourth inning when the Vikings scored their second run when junior David Tyre-vigil hit a big single up the middle to drive home Stancil with what turned out to be the winning run. Vikings were now up 2-0.

In the bottom half of the fourth, the Centaurs got one run back when junior George Aceves dropped a single into right field to bring home Skylar Blocker from second.

With both teams meeting again on Thurs., May 12, at Samohi, Culver City still has a chance to make the coin flip relevant. But another Samohi win, and the Vikings clinch the league. Be sure to check the results of game 2 online at smmirror.com, where results and highlights will be available to view on video on Friday.