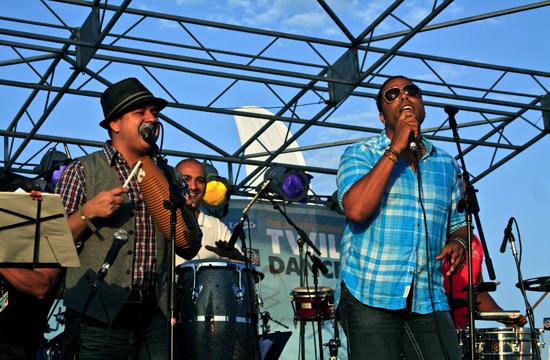 The 37th annual Twilight Dance series opened with Oscar Hernandez and his LA Salsa All-Stars and concluded with Groupo Fantasma. The inaugural event for this year’s series of concerts successfully drew thousands of people to see the free performances at the Santa Monica Pier.

Before the show, about a hundred amateur salsa dancers were given free lessons from 2009/2010 World Salsa Champion and Academy of Dance Instructor Cristian Oviedo.

“Cristian has a great method for teaching the basics of salsa dancing,” dancer Teresea Martino said. “Everything else is just styles.”

“We need a bigger dance floor,” Oviedo said as he instructed all the eager dancers in forward, sidesteps, and cumbia basics. A large dancing mat had been placed in the middle of the pier by event organizers for the dancers to use while others crowded around.

Thirsty revelers sipped wine and beer on the couches in the area behind. A blonde-haired, quick-moving Aaron Chaum ran the “Sonoma on the Deck” wine garden and brought some sophistication to the event. Chaum’s choice selection featured Argentinian and California wines and light beer to interested patrons over the age of 21.

As the celebration on the pier got underway, large clusters of families and friends, sat on the beach below, many taking the opportunity to picnic. Some proudly displayed bags of holiday Luminarias neatly placed in rows around them. Many of these artistic bags were not only weighted with sand but also highly decorated, with each bag containing an individual candle to illiminate it from the inside.

“It’s a great night for music,” Mayor Richard Bloom announced over the loudspeaker at the beginning of the show. Bloom took the chance to highlight a first: a new nine-by-twelve foot Jumbotron LCD display screen gave those below a chance to get a better view. “How do I look?”

Backstage, Oscar Hernandez waited for his cue to go on stage.

The moment came and Hernandez received his cue to walk on stage. Moments later the L.A. Salsa All-Stars began to play. Soon the airwaves became filled with island sounds of Caribbean music with the melodies led by Cuban born singer Adonis Puentes.

Puentes seemed exceptionally excited about the event. “I left Cuba to play music and make people happy,” he said. “Since I came to L.A. I fell in love with L.A. and this is where I want to stay.”

Puentes spent much of his time in Canada since leaving Cuba in 1998 and he was ready for the large Santa Monica crowd. This was his first chance to shine with the newly formed L.A. Salsa All-Stars.

Wearing Aviator sunglasses and smiling ear to ear, Puentes quickly made his presence known. His silvery sounding voice, enhanced by the bongos, congas, and other Salsa instruments, serenaded an enthusiastic and receptive crowd. Soon hundreds were dancing to the Salsa music.

As the night slowly rolled over, the pier’s solar-powered LED Ferris wheel added colorful glittery effects to the ambiance of the Latin music. Its kaleidoscope of colors with shades of greens, pinks, reds, and blues added the smiles on this temperate night.

Hernandez’ All-Stars wrapped up their set to sounds of cheers and clapping.

Next was Groupo Fantasma. This Tex-Mex motley crew of musicians, famous for fusing together their own unique view of Salsa, showcased an entirely new and modern Salsa sound. Their unique blend of guitar, brass, and percussion instruments were welcome by many at the event.

“I’ve been waiting to play my congas all day,” Matthew “Sweet Lou” Holmes said. “People dancing and moving around is what it’s all about.”

Bubbles floated through the throng of people on up and around the members of Groupo Fantasma during their set.

Local born Josh Levy showed off his saxophone skills in the midst of this surreal scene.

“As a kid that grew up here, I am happy just to have a gig on the Santa Monica Pier,” Levy said. “This is a place that’s famous on the planet as a major tourist destination and to me it’s a dream come true.”

During the middle of the set Groupo Fantasma covered ‘80s band Talking Heads’ “Burning Down the House.”

Mark “Speedy” Gonzales took a few solos sliding his salsa characteristic trombone back and forth. “I use the glissando technique when I play my trombone,” Gonzalez said.

Gilbert Elorreaga added to the effect with his small brass trumpet. He had no problem flutter tonguing and belting out high registering sounds. His buzzing added a zing to Groupo Fantasma’s distinct tunes.

On guitar, Beto Martinez dazzled the crowd as he sent sounds through the delay pickups on his foot pedals. John Speice, Groupo Fantasma’s drummer, anchored everything together by rocking out on his blue sparkle kit complete with Sabian crash symbols while Greg Gonzalez, a Vin Diesel look-alike, structured the music ‘70s style by strumming a turquoise bass guitar. Nicaraguan born Jose Galeano took vocals and co-sang the set with Rodolpho “Kino” Esparza.

“It was beautiful,” Galeano said. “People here got a nice dose of our different view of Salsa.”

“Sweet Lou” Holmes was especially proud of his band’s performance. “With our instrumentation, we can go in lots of different directions and we proved that we had the ability to do that tonight,” he said.

“The beach is a whole scene of its own,” Bloom said. “It attracts our own community and the surrounding communities. The quality of the Santa Monica Twilight Dance Series has always been at a very high level.”

By mirrormmg July 8, 2011
in Life and Arts
Related Posts