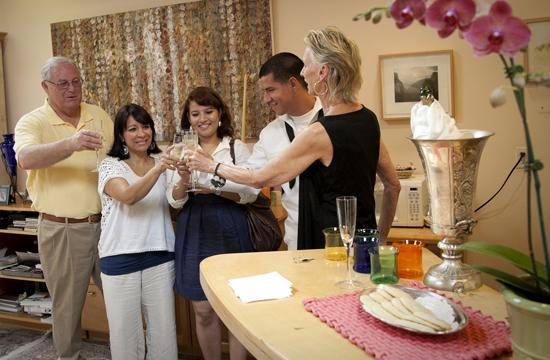 When the Santa Monica City Council announced its support of the Navy Week celebrations at its July 12 meeting, the plan was to welcome a contingency of sailors who arrived on July 31 into the Los Angeles Harbor in San Pedro and then bussed up to Santa Monica. Nary a council member hinted at the prospect of playing Cupid for one sailor and his fiancée.

Thanks to council member Bob Holbrook, the Navy couple was arranged to participate in a special reception where they received several gifts in anticipation of their matrimonial union.

Alas, on July 31, not only did a large contingency of Navy sailors arrive in town in commemoration of Navy Week, U.S. Navy Sailor Miguel Valencia and his fiancée, Genesis Teinado, were presented with special wedding gifts courtesy of Santa Monica.

Among the gifts provided to the couple included a Hartnell custom-designed couture wedding dress for the bride-to-be and a honeymoon package (sponsored by Downtown Santa Monica) for the couple once they officially tie the knot.

The wedding dress was donated by designer Hanna Hartnell at her studio on July 31, where Genesis sized up the gown. In addition to the dress fitting event, Downtown Santa Monica chipped in with an extensive honeymoon package that included a $250 gift card to be spent at Santa Monica Place as well as a Honeymoon dinner for two at the Lobster restaurant on the Santa Monica Pier. Other items in the package included a one-night stay at the Fairmont Miramar Hotel & Bungalows and a bouquet of flowers from Magical Blooms at The Market.

Hartnell coordinated the dress fitting and gift sponsorships with Holbrook after council members announced it was coordinating a day for Navy sailors to visit Santa Monica. When reaching out to Holbrook, Hartnell had asked him if he had known of any sailors who were planning to marry soon. Turns out Holbrook did indeed know someone: Valencia and Teinado.

Coincidentally, Valencia had requested to visit Santa Monica on July 31. Valencia is stationed on the USS Carl Vinson. The couple plans to tie the knot after his next deployment.

On July 12, council members unanimously approved a request by Holbrook to co-produce a Navy Day at the pier on July 31 in honor of Navy week. The Council allocated $6,000 of City’s contingency funds to bring 300 Navy sailors into Santa Monica, fully decked in their white uniforms, for a series of excursions in town. Holbrook explained that 300 sailors visiting Santa Monica would actually be transported here from the Los Angeles/Long Beach Harbor, where five Navy ships and 5,000 sailors docked on Sunday.