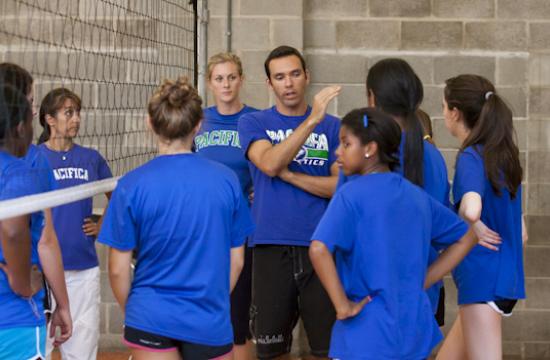 In his first season in charge, Pacifica Christian head volleyball coach Billy Allen made an impression. The Sea Wolves went 23-7, won the Heritage League with an undefeated conference record and didn’t drop a set in the CIF tournament before the quarterfinals, where Bellarmine-Jefferson clipped Pacifica Christian 3-1.

But the team wasn’t satisfied.

“We want more this year, I think, mostly because we return almost everybody,” Allen said. “We’ve got a lot of good talent, a lot of good hitters, so hopefully we can take it even farther this year.”

The Sea Wolves lost three seniors, including libero Hannah Hamilton, but what they return is even more impressive. Sophomore Grace Minchin brings in her experience after collecting 250 kills as a freshman, and junior Genevieve Hook was second on the team with 198 kills last year.

“We’ve gotten really close to going far in the last two years when we had our big players, the big powerhouses and stuff,” Hook said. “This year, i think everyone is (on an) equal plane.”

The equal plane can keep the practices intense and push the starters to get better, which could lead to a better finish.

“We’re planning on getting into State and well on from there,” said junior setter Kiani Lane, whose 491 assists make her reigning Heritage League MVP from 2010.

“We’re going to have to work, conditioning-wise, just repeats on basic skills and just really get fired up, which I think will be doable.”

Allen said the main goal to start is to once again win the Heritage League for the fifth consecutive time. The Sea Wolves have not lost a league game since 2006, and that includes both the Heritage and Mulholland Leagues.

Lane said, “We’ve never lost a league game (since I’ve been here) and I don’t plan on losing one this year.”

This year, Allen wants to test his team with non-league opponents to prepare them for the postseason. Two tournaments in Brentwood and Arcadia will have bigger high schools to test the Sea Wolves.

“I think we all need to have kind of the same motivation, be on the same page starting out,” she said, “Every game is just as important as the State game, and we really need to push all the way through.”

The Sea Wolves start the season ranked No. 4 in Division 4-A. Their first game will be in Santa Monica at Crossroads on Sept. 9.