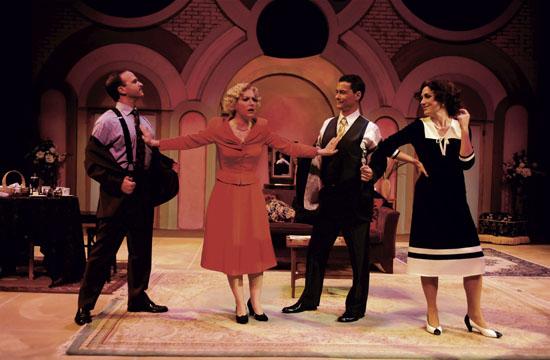 Every once in a while a production comes along that is sheer perfection. Noel Coward’s timeless “Private Lives,” on stage at the International City Theatre, at the Long Beach Performing Arts Center, is one of those rare theatrical experiences.

The delectable story, which unravels on a most delightful set design by Kurt Boetcher, is the adventures and misadventures of two couples honeymooning in the same hotel in France. Couple number one is comprised of Amanda, exquisitely played by the beautiful Caroline Kinsolving, whose grace and poise is matched by her crack comic timing. Her new husband is Victor, played with delicate restraint and an English stiff upper lip bearing by Adam J. Smith. He questions Amanda at length about her former husband Elyot, whom, I should mention about now, is also on his honeymoon with his new young, rather silly wife Sibyl, played by Jennice Butler. Amanda tries to duck answering Victor’s persistent questions and instead, in her most perfect English delivery, offers opinions on a myriad of subjects, tossing out almost throwaway lines such as, “Honeymoons are a very overrated amusement.” She has a negative comment on just about everything, which poor Victor tries to deflect in a patient, loving manner. After a while, they leave the lovely hotel patio and retire to their room to freshen up for cocktail hour.

Enter Freddy Douglas who has created a perfect Elyot– a suave, handsome, matinee-idol type, who is also somewhat of a prig. Sibyl is madly in love with her new, rather aloof husband but he, too, is quite negative. His wife tries to question him at length about his former wife Amanda, and the crafty Coward cleverly constructed the dialogue so that the separate scenes between the couples are almost a mirror image of each other. They, too, retire to their room to dress for cocktail hour as Amanda re-enters with two cocktails. She sits down with her back to the other table and in comes Elyot who does not see her. Amanda takes out her compact and begins to powder her nose. As she is looking into the mirror, in a most hilarious slow take, she sees him and is shocked and yes, soon all hell begins to break out. At first they are quite hostile toward each other, with accusations flying back and forth but after a while, they soften, reminisce about the good old days, and realize they are still in love.

Shocked by the turn of events, Amanda and Elyot try to convince their respective spouses that they must leave the hotel immediately. Both of them refuse and in a not-so-surprise twist, Elyot and Amanda decide to flee the whole scene and head to Paris, leaving their spouses to cocktail hour without them.

At the top of Act II, in Amanda’s flat in Paris, we see Elyot dressed in an elegant red velvet smoking jacket, white shirt, and an ascot, feeding grapes to Amanda. But alas, it doesn’t take long for the old difficulties to surface and soon the love nest turns into a battleground, putting them on an emotional roller coaster with transitions traveling at the speed of rapid machine gun fire. The action continues, the abandoned newlyweds enter and well, you’ll have to see the ensuing surprise twists and turns for yourself.

Under the impeccable direction of Luke Yankee, the acting is uniformly perfect, with Kingsolving, Douglas, and Smith capturing the nuances of their characters living in this divine drawing room comedy. Kingsolving displays a broad range of vocal delivery and in one scene, where the four of them are having breakfast, she grinds out the word “croissant” in such a way that she could have been offering everyone Draino. She chews up and spits out Coward’s cutting dialogue with the controlled force of a raging bull, only to transition a moment later into a loving, gentle pussycat.

In a cameo role as the maid, Wendy Cutler as Louise is quite hilarious. She mutters her lines in French, quite annoyed at the mess she has to clean up, and doesn’t particularly enjoy serving people. It’s a lesson in reading body language, as subtitles were not necessary.

The technical elements of the production are excellent with kudos to costume designer Kim DeShazo for dressing the actors in gorgeous clothing, reflective of the period, and to Bill Georges who beautifully enhanced the production with his light and sound design.

Originally produced to great success in 1930, the play catapulted the multi-talented Noel Coward into being the highest paid writer in the English-speaking world. “Private Lives” continues to be as entertaining today as it was 81 years ago as one thing that remains pretty much unchanged are the challenges inherent in relationships. This play may not solve your relationship problems, but you’ll leave the theatre laughing.