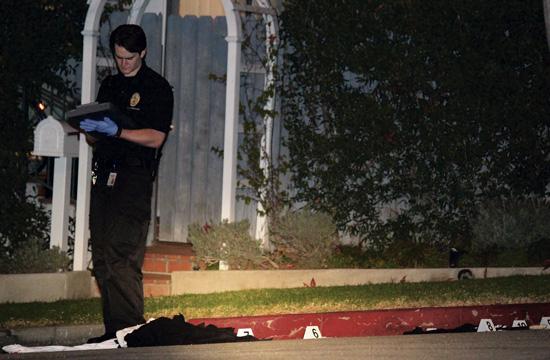 Gang activity has been around in the Pico Neighborhood for as long as Oscar de la Torre can remember. As the founder of the Pico Youth and Family Center, de la Torre closely monitors crime in Santa Monica and the Westside. While he says gang activity is at an all time low compared to the past decade, he is concerned about a flurry of gang activity during the past few months.

One red flag that gang activity is escalating is the rise in graffiti, which has cropped up during January on Pico Neighborhood trees and even Edison Language Academy. But what is most alarming is the recent wave of gang-related violence involving youth.

Last month on Jan. 3, David Morales Jr., an 18-year-old Latino, was fatally shot near Sawtelle Boulevard and Pearl Street just beyond Santa Monica city limits at about 7:30 p.m. Morales Jr. was walking with a 17-year-old friend when two unknown males fired several gunshots before fleeing the area. Morales was pronounced dead at the scene while the other victim was taken to hospital where he was treated and released.

Investigators described the assailants as Latinos between the ages of 16 and 20, suspects that de la Torre believes may be connected to a Santa Monica gang.

What happens next in the cycle is what de la Torre is trying to prevent by collaborating with the police, the city, the school district, and other youth organizations.

“This young man was just killed at 18 years old, and the potential perpetrators are 16 to 20 years old,” de la Torre said. “So what does that mean? The victim has friends and he’s got relatives. I don’t know if he’s gang-involved or not. Even if he’s not gang-involved, the gang members from that community most likely will retaliate over here. It just goes back and forth, it’s a cycle.”

The Santa Monica shooting that de la Torre references occurred on Tuesday, Dec. 6, 2011. A Santa Monica High School student was shot at about 3:25 p.m. in the 500 block of Pacific Street. Luckily his injuries weren’t fatal.

The suspects were two male hispanics in their 20s driving a late model dark color SUV, possibly a Honda or a Kia Sorrento. Santa Monica police confirmed its investigation into this shooting is ongoing.

“The case is being investigated as gang-related,” SMPD Sgt. Richard Lewis said. “The department is not making the accusation that the victim is a gang member, but he is gang-affiliated. It’s not a random shooting that residents need to be fearful for their children.”

The last Santa Monica gang-related homicide was Richard Juarez, 20, which occurred on Nov. 3, 2009 in the 200 block of Virginia Ave. Coincidentally, the last name of the Samohi student shot in December was also Juarez, though de la Torre said they are unrelated.

De la Torre said it was no surprise that the poorest part of the city was where the most homicides occurred.

“If you look at a map since 1989, you would find most of these 40 dots clustered between 16th Street and 23rd Street on Pico Boulevard with each dot representing a death,” de la Torre said.

“In an eight block radius, you would have more than 90 percent of all the 40 homicides that have occurred.

In a move to identify prevention, intervention, and enforcement strategies to reduce the City’s gang problem, a comprehensive report examining youth criminal activity patterns has been compiled.

Dated Feb. 9, 2012, this draft report created by the Youth Resource Team Policy Group is titled the “Santa Monica Child & Youth Report Card,” which is a project of the City of Santa Monica in collaboration with the Santa Monica-Malibu Unified School District, Santa Monica College, and community agencies.

The report uses data on youth and adults who have been identified by the police department as gang members.

Currently there are two main active gangs – Santa Monica 17th Street and Santa Monica Little Locos – with the total number of members estimated at 145, but only 70 are considered as active with more than half aged 18 or above, according to the report. The report continues saying about 30 of the 70 youth gang members are active members of the Santa Monica gangs with the remaining gang members outside of Santa Monica.

The total number of youth committing gang related crimes was 27. Of these, 25 were males and two were females. The ethnic breakdown is 21 Latinos, five African-Americans, and one Caucasian.

The report concludes that the most common crimes were aggravated assault and vandalism. There were also a few incidents of weapon possession.

While de la Torre concedes the amount of trauma for this part of the Santa Monica community is very real, he does see every crisis as an opportunity.

In part two of this series, The Mirror will look at the founding of the Pico Youth and Family Center and how it falls into the public safety strategy for the City of Santa Monica.