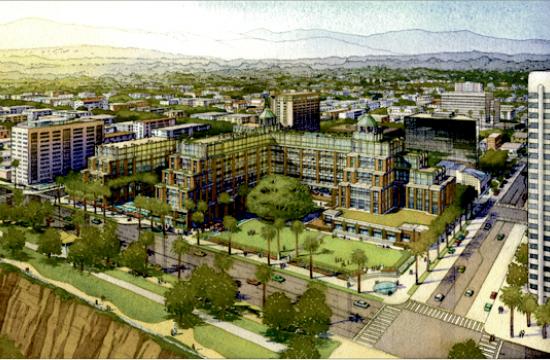 Not all change is good was the message from an emphatic overflow crowd to planning commissioners at Santa Monica City Hall on Wednesday night about preliminary plans to upgrade the Fairmont Miramar Hotel, which would alter the venue’s look if it more than doubles its size.

The proposed plans to rebuild and expand the Miramar was the primary focus of a special meeting for planning commissioners who got the ball rolling on what is expected to be an extensive debate and discussion of the hotel’s preliminary plans.

In all, more than 80 speakers took the podium to share their respective thoughts on whether they approved of the Miramar’s proposed plans. There was a mix of support and objection to the project.

Among the most common complaints from opponents of the project was that the expansion was no longer necessary and the elements of the proposed plans were excessive.

“This is not a hotel renovation – it’s a massive mixed-use project the size of Santa Monica Place with towering luxury residences,” said Diana Gordon, co-chair of the Santa Monica Coalitions for a Livable City (SMCLC). “The Miramar sits on one of the most unique properties in Santa Monica across from Palisades Park and the ocean. Ownership of such a special property imposes special responsibilities to be a compatible neighbor that respects its surroundings when it decides to renovate.”

Speaking of renovations, the applicant – Ocean Avenue LLC – outlined a myriad of changes to the hotel.

According to the initial plans, the new-look Miramar would include about 265 guest rooms (down from 296) and 120 condominiums, an additional 40 low-income housing units, retail space along Wilshire Boulevard, and a public garden. Plans also call for 484 subterranean parking spaces, about three times more than the current 160 parking spaces available.

According to the staff report, the low-income housing units would be located across the street from the Miramar on a property the hotel owns on Second Street. Currently, the hotel uses that property as a parking lot.

In terms of square feet, the Miramar would be expanded from its current 262,000-plus square feet to more than 550,000 square feet.

Plans also call for the demolition of the existing 10-story Ocean Building located in the center of the site, replacing it with a 135-foot 12-story structure. Another structure, a 10-story, 104-foot tall California Building, would be added on the corner of Ocean and California.

Supporters of the proposed plan applauded the design upgrades and facility expansion, stating that the new Miramar would result in increased revenue for City Hall. After all, a larger hotel could draw additional tourist dollars benefiting both the Miramar and local businesses, not to mention a larger tax base.

A few speakers were happy to see the hotel would retain some of its history, as the developer promised to keep the Australian fig tree that was planted on the site in 1879. The six-story, 840-room Palisades Wing, which was built in the 1920s, would also remain on site.

One group, A Community of Friends (ACOP), lauded Miramar’s expansion plans as a boon for affordable housing.

“With the revitalization of the Miramar Hotel, the City has an opportunity to increase housing options for lower income people in the City,” Dora Leong Gallo, the group’s CEO, stated in a letter to planning commissioners. “Providing housing in areas close to employment and transit is sound public policy.”

Meanwhile, some opponents stressed the new plans were not consistent with the Land Use and Circulation Element (LUCE) as it would increase traffic.

Another point raised by the opposition: fewer hotel rooms and a “degraded quality of life for residents.”

Wednesday’s special Planning Commission meeting to discuss the float up of the Miramar Hotel expansion was the first in a series of planned analysis and dialog involving the public, planning commissioners, and council members.

Should the plans be vetted out through the public process, the city council will eventually decide on ultimately moving forward with the Miramar expansion, which would be considered as a development agreement (DA).

The Miramar, currently owned by MSD Capital, L.P., sits on 4.5 acres on the corner of Wilshire Boulevard and Ocean Avenue and was first used as a hotel in 1924.

In addition to the Miramar’s expansion plans, Santa Monica is also considering adding two new hotels nearby, a Hilton and a Marriott.