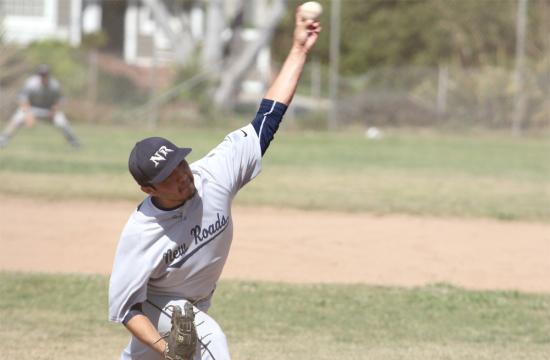 He wasn’t supposed to pitch on this day.

New Roads coach Matt Steinhaus said his pitcher, Anthony Carrillo, injured his left hamstring last week. Because Carrillo is a left-hander, this could have hurt his Jaguars in the CIF baseball playoffs.

But on Tuesday, Carrillo said he woke up and felt good.

“I was just thinking about winning and I didn’t want to look back,” the player known as “Ace” said. “I didn’t even want to think about not making it to the next round.”

Because of Carrillo, the Jaguars are advancing to the CIF semifinals for the first time in school history with a 6-1 victory over Santa Monica neighbors Pacifica Christian. He struck out the first eight Seawolve batters he faced and ended with 14 strikeouts altogether. He walked one batter and only gave up three hits, one of which was a home run.

“That guy’s got so much backbone, it’s incredible,” said Coach Steinhaus.

“I had a nine-pitch first inning on strikeouts, and to take (Pacifica Christian’s) top three down, he made a statement that he was in a zone… And right out of the gate, I think he was in their heads that he had his best.”

With Carrillo’s dominance, the Jag bats were at ease and lit up Seawolves ace Kevin Hammer with 11 hits, including a three-run homerun by Franky Bernstein to blow the game wide open.

The Seawolves, on the other hand, never found their groove.

“He’s a good pitcher. He outpitched us,” said Pacifica Christian coach Julian Chavez. “A pitcher that good who’s hitting his spots, you try to jump on that first pitch before you get down in the count. We put a few balls in play, but we really weren’t squaring up the ball.”

Carrillo said reaching the semifinals is a dream come true.

“To do this for our school, that doesn’t focus on athletics is just special,” Carrillo said, “not just for me but for my school and my teammates. I don’t know. It’s amazing. I have no words.”

New Roads will play Firebaugh, possibly at West LA College, on Tuesday. The Mirror will provide details when they are made available.

You can see highlights from this game in Monday’s Santa Monica Beat.