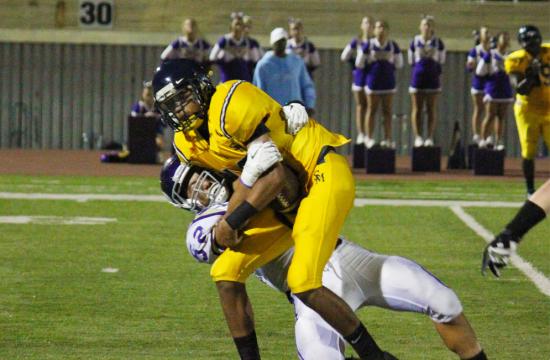 Santa Monica High School (2-2) quarterback Ryan Barbarin threw two interceptions and only one touchdown against Valencia High School (2-2) at home on Friday night during their loss 41-13, yet neither he nor his team gave up even after trailing 28-0 at the half.

“I’m glad the kids fought for four quarters and we showed some resolve,” said Santa Monica High School Head Coach Travis Clark. “But I am definitely disappointed. We beat ourselves tonight.”

Quarterback Sean Murphy of Valencia High School broke the confidence of the Vikings defense early piling up 28 points by the end of the first half.

On offense, LaRue was paired against Valencia’s lightning quick receivers that seemed to catch everything thrown at them, and this coupled with his inability to make a big dent with his own receiving skills on offense, led to his frustration in the first half.

Yet despite being double teamed, LaRue regained his composure during the second half and added 12 of the 13 points scored by Santa Monica High School energizing the home crowd with one novel rushing touchdown where he lined up at quarterback and ran the ball in to score and one receiving touchdown tossed to him by Barbarin.

“We got good pressure on the quarterback so LaRue wouldn’t have time to do his double moves,” said Valencia Head Coach Larry Muir. “We did that and our defensive backs did a good job and didn’t let LaRue get over them.”

“Our receivers ran some great routes to get open and we were able to run the ball just enough where we could get some of the play action stuffed and draw some of those backers up a little bit,” said Muir. “We were able to get our receivers behind those backers and drop them in front of the safeties but I think the key was the offensive line that gave us time to throw the ball.”

Clark thought that his defense is still young and learning but have the capacity to grow over the course of the season.

“Murphy didn’t expose any holes in our secondary,” said Clark. “It was just some missed coverages and that is correctable. I got a lot of newbies in the program and we got to find a rhythm here and we are stumbling a little bit, but we are going to be fine.”

Next game for the Santa Monica High School Vikings is away against Hart Friday, Sept. 28 at 7 p.m.