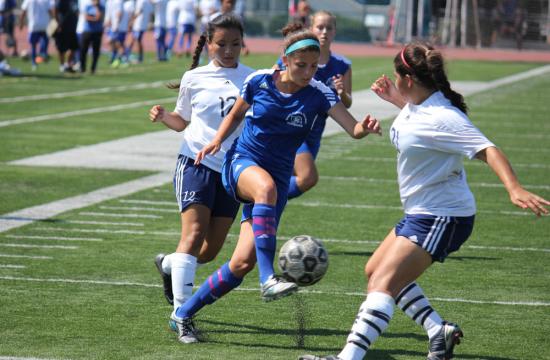 The Santa Monica College Women’s Soccer team won their first game at home against Harbor College on Tuesday afternoon 1-0 against an evenly matched team of Seahawk women who battled the Lady Corsairs in an emotional game that was decided late in the second half when forward Rosie Potts scored the game’s first and only goal.

“I felt that it was a great collective effort by the group and I thought it showed commitment from our group of what kind of mentality we are going to be bringing to the season,” said Women’s Head Soccer Coach Aaron “Bendo” Benditson. “To grind something out, I thought we really showed ourselves well today.”

Santa Monica College goalkeeper Cindy Godina did her job defending the goal and didn’t allow any of the Seahawks to score on her watch.

“She’s fantastic and we are very lucky to have her,” said Benditson. “Not only is she a great goal keeper but a great soccer player. She is very good with her feet and makes great decisions.”

For the majority of the game the Corsairs were on the attack taking shot after shot but Seahawk keeper Zuri Moraga refused to let the ball in the goal.

But Potts changed the game with her score off Moraga sealing the win with 3:31 remaining on the clock in the second half.