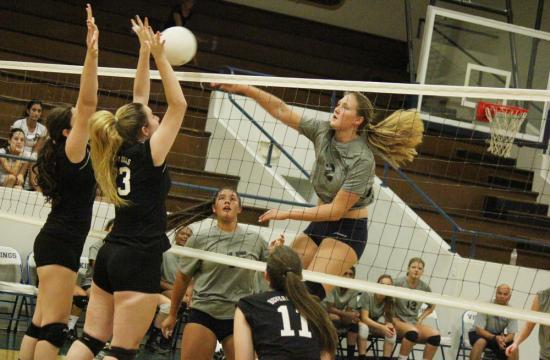 Santa Monica High School (2-0) won their first volleyball game at home on Wednesday against the Beverly Hills High School Normans (1-3-1) in three convincing sets 25-17, 25-12, and 25-12 to keep the Vikings undefeated for the season.

Blossom Sato and the rest of the setters on the Vikings team worked well to give high tower powerhouses Joslyn Hayes, Greta Schmittdiel, and Jordan Levy the chance to pound away a solid delivery of kills that ultimately splintered the defense of the Normans and led to the Vikings victory.

Avalon Lennon of the Santa Monica High School volleyball team thought that Beverly Hills kept the Vikings on their toes throughout the entire game.

“You never know with Beverly Hills,” said Lennon. “They have a tendency to bounce back.”

Lennon thought that the middles did “a good job moving the ball around even when the set wasn’t so great,” and that the players who came in off the bench “kept their focus.”

“Our passing and transition was really good, and that’s why we got to set the middles,” said Lennon. “You can only set the middles if you are in system.”

According to Lennon, the big blockers Hayes and Schmittdiel worked well when the rest of the Vikings were able to get a good set for them on a good pass.

“Because our passes were pretty on point they got a lot of kills,” said Lennon.

Jherra Rick, Head Coach of the Beverly Hills High School Normans, thought that her team was a bit intimidated.

“We kind of got in our own heads when we were in a bit of a deficit of two or three points, and past three it’s really hard to come back from,” said Rick. “I know that got to us in game one and we were almost really shocked with ourselves. We have been working very hard and it was nice to see it pay off.”

The entire set the Normans were fighting toe to toe with the Vikings until point 17 when a kill by Hayes and two kills by Levy put the Vikings up 20-17.

From there, Hayes and Levy each scored two more kills and the game ended at 25-17.

According to Rick, in games two and three the Normans lost a little bit of focus and weren’t anticipating the ball very well.

“We had a little bit of miscommunication there in games two and three,” said Rick. “But I am excited to see them again.”

A rematch game between the Vikings and the Normans is set for Oct. 18 at Beverly Hills High School.

Santa Monica High School’s next game is at home against Culver City Friday at 3:15 p.m.