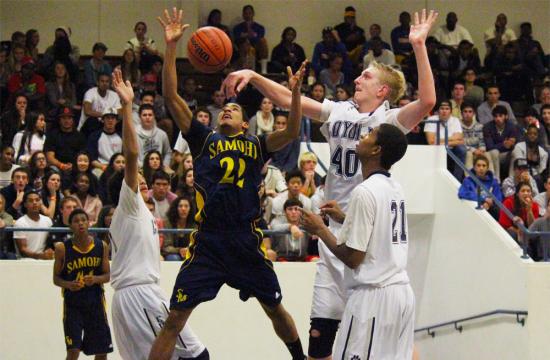 Santa Monica High School made it all the way to the semi-finals in the Third Annual Westsiderentals.com 2012 Tournament before losing to Loyola in a spectacular overtime thriller that saw the Cubs come out on top 83-82 at home Friday night.

Cubs Peter Jackson Cartwright scored 25 points, including four three-point shots, to lead the power struggle and hand the victory to Loyola in the hard fought and intense game.

“We knew it was going to be competitive throughout,” said Jackson. “We lost to them in the championship in the Torrence Tournament and we were really coming out looking to run our game and play our game. But they are a good team and fought back.”

The game started out strong with both teams scoring three point shots to add to their first points of the night and provided a harbinger of the intensity and accuracy of shooters to follow in the game.

Both teams laid it thick on each other with both Matthews and the Cubs 7-0 forward Thomas Welsh wowing the crowd with their spectacular dunks and both teams matching each others three point shots.

With 10 seconds left in the game, the Vikings were on top holding on to the lead 73-70 and doing their best to hold off a ten-point comeback in the final two minutes by the Cubs.

But Loyola rose to the challenge with Jackson-Cartwright hitting a three at the buzzer to send the game into overtime.

With the momentum on their side, guard Khalil Bedart-Ghant scored a three-pointer and forward Mtume Armour scored six-points to power the Cubs to victory with the Cubs defense shutting down Matthews to win the game.

Samohi went on to play Chaminade Saturday afternoon and lost 70-67 after a rough first quarter where the Eagles went up 18-9 in the first quarter.

Samohi came back in the second quarter to make the game 38-36 by the end of the half.

Chaminade held on to win the game.

Next games for the Vikings are at home against Palos Verdes Peninsula Thursday, Dec. 13 at 7 p.m. and against Legacy Saturday, Dec. 15 at 1 p.m.