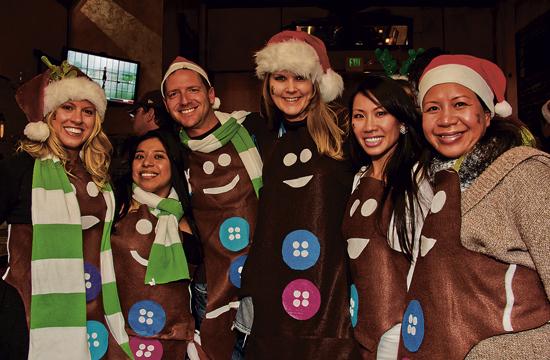 As the sun set over the Pacific Ocean, the City’s top bars along four routes filled to capacity with revelers sporting Christmas attire.

Genevieve Riutort, of the Westside Food Bank, said all of the bars reported huge turnouts.

“Everyone is in their holiday gear, they’re looking good, they’re feeling good,” Riutort said Saturday night. “It’s fun, it’s happy, and we’re all having a great time, but it’s for a bigger cause to help our neighbors in need and I think we’re doing it.”

Grant Woods, owner of Sonny McLean’s Pub, confirmed it was one of the busiest night’s of the year.

“We’ve got extra staff on the bar, extra staff on the floor, extra security to keep crowd control in order and just behavior in order,” Woods said during the pub crawl. “It’s Christmas time and they are all dressed beautifully and it’s an enjoyable night and to not be part of it would be quite a shame.

William O’Sullivan, owner of O’Brien’s on Wilshire Boulevard, said he didn’t even get a chance to take a break during the night.

“I would like that they do it more than one time a year because it would be good for us and it seems that people enjoy it,” O’Sullivan said. “The economy not being what it should be, I think it’s great for bars and great for the businesses that get involved. I would also recommend that more businesses get involved because honestly we get more business than we can handle.”

Riutort said the event helped to raise awareness about the issue of hunger in the community while also giving people the opportunity to make a difference while having a great time.

“Over the past four years, the Santa Monica Pub Crawl has made it possible for Westside Food Bank to distribute about a quarter million more pounds of food for local families in need,” she said. “That makes a huge impact, especially during the holidays.”

She said the biggest impact has been the switch from canned food donations to cash donations for admission.

“The fact is, with the size and efficiency of Westside Food Bank’s operations, we can acquire a lot more food for each dollar than someone going to the supermarket,” she said. “This year, more than 105,000 local people, half of whom are children, depend on Westside Food Bank for good nutritious food to sustain them through a difficult time. On their behalf, I’d like to thank Spin PR for putting on the event, all the event sponsors, the more than 5,000 people who ‘crawled’ this year, the bars and restaurants that participated, and the 50 volunteers who donated their time to make the event a success. Thanks for helping to feed hungry families in our community!”