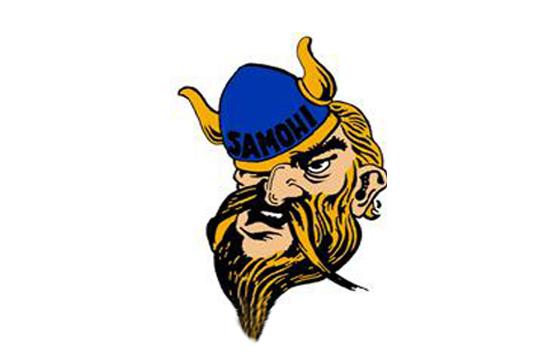 It was the top half of the third inning and Roosevelt (1-3) had scored the first run of the game following a throwing error by Samohi’s (4-1) first baseman Connor Greene.  Greene looked to redeem himself at the plate on his next at bat at home Tuesday afternoon.

“I definitely was looking to make up for that easy run that I gave them,” said Greene.

With lead-off man Alex Turner setting the table with a single to start the inning, Greene stepped up to the plate with a chance to drive in two runs. After working the count 2-1, Greene smacked a single to center field allowing both runners to score and put the Vikings up 2-1.

“I knew I had to hit it up the middle and that’s exactly what I did,” said Greene.

By the end of the game the Vikings offense had exploded over the Rough Riders 9-1 and dominated the pitching game by utilizing their deep roster of pitchers in the bullpen and collecting eleven hits as a team.

Strong pitching by starter Eli Bieber and timely hitting by Greene led the Vikings to their third straight victory.

The first two runs opened up the Vikings offense as they scored multiple runs in each of the next three innings to put away the Rough Riders.

But before the offense could strike again, starting pitcher Eli Bieber had to work himself out of a bases loaded jam in both the fourth and fifth innings.

Bieber got the next two batters out to end the fourth inning after walking a batter and allowing back-to-back singles.

Bieber then got the first two batters out to start the fifth inning before surrendering three straight walks and ending his night.

Samohi head coach Kurt Schwengel would then call on his plethora of relievers to end the bases loaded threat.

“We are so deep it makes it hard on me because we have so many options,” said Schwengel. “It’s not easy to choose who to pitch each day, but it’s a good problem to have.”

Bieber allowed one earned run while walking four batters, striking out seven, and earning the win.

Greene finished his day with two hits, three RBI’s, a run and a stolen base.

Vikings Alex Turner had another strong performance at the plate and running the bases as he accumulated two hits, two runs, two stolen bases, and an RBI.

Next game for Samohi is against Woodrow Wilson (2-3) in a double-header at home Tuesday starting at 1:30 p.m.