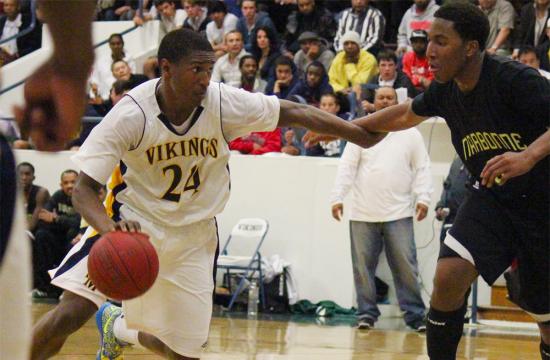 With a minute left in the third quarter of the first round of the CIF Basketball State Playoffs, Santa Monica High School (26-6) held a commanding 57-36 lead over Narbonne (16-14) only to give most of it up in the fourth quarter before pulling off a win against the Gauchos 73-68.

Santa Monica Basketball Head Coach James Hecht said that the Vikings play in the fourth quarter was not what he expected.

“They got on fire and they shot the ball well and attacked as well,” said Hecht. “We seemed very hesitant and very uncharacteristic about how we have been playing the last couple of weeks.”

Prior to the Vikings lackluster fourth quarter, Samohi guard Jordan Matthews had racked up 28 points while guard Trevis Jackson was hot on three-point shots sinking three in the third quarter.

“Trevis made big shots at big times in the game and we needed him,” said Hecht.

Hecht said that he believed that Samohi had more depth then Narbonne and that was why the Vikings won.

“No doubt we felt that they were very athletic and played that up tempo style of basketball that we like to play,” said Hecht. “But given the short time we had to prepare, we felt that we were deeper and we were going to go ahead of them.”

The Gauchos went on to score twice as many points against the Vikings in the fourth quarter putting up 32 points only to be stopped five points short of a massive comeback upset at 73-68.

“We felt they got tired at different points in the game,” said Hecht. “But in that fourth quarter, they looked like they were fresh out of the gates.”

Matthews accounted for most of Samohi’s boards in the fourth quarter adding nine points and Jackson added three, but the rest of the Vikings combined were held to only four points.

Hecht said that he believed that the Vikings were lucky to win the game.

“It is what it is and we came away with the victory, I think very luckily,” said Hecht.  “But we have to refocus if we want to get past Saturday night’s game.”

Next game for the Vikings is against Palisades Charter High School at home Saturday at 7 p.m.