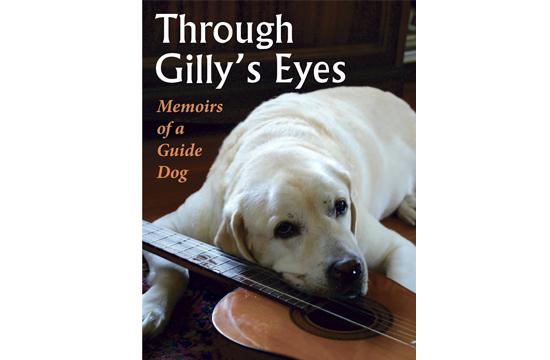 Santa Monica resident Matthew VanFossan may be blind, but it hasn’t stopped him from publishing his first book, “Through Gilly’s Eyes: Memoirs of a Guide Dog.”

A 2012 graduate of the University of Santa Monica’s Master of Arts program in spiritual psychology, VanFossan is a counselor and speaker.

Along with his second and current guide dog Achilles and his wife Rita, he frequents the dog area of Joslyn Park in Santa Monica.

“In the book, I took on Gilly’s voice in homage to the guidance, companionship, and love that his presence brought to my life,” he said.

He said he tried using a cane for six awkward months, and then got a guide dog – a Labrador Retriever named Gilly.

VanFossan said the Lab had just been named the nation’s most popular dog for the 22nd straight year.

He said Gilly, the narrator of “Through Gilly’s Eyes,” would doubtlessly agree with this rating.

Self-described as one of the handsomest dogs at guide dog school, Gilly knows the value of Labrador appeal, VanFossan said.

“When he was paired with me, a newly blinded college student, there begins a relationship that transcends ordinary bonds between dog and man,” he said. “From guide dog school to college and on to Brazil, Gilly narrates our adventures with humor and wisdom, if not modesty.”

He said Gilly knew his worth and showed him how to improve his situation.

“Lighten up! It’s not that bad!” and “Trust me, I’m a professional,” Gilly comments in the book as VanFossan fumbles through their first training session.

And he’s not above a bit of canine sarcasm.

When VanFossan miscounts his steps on their first outing at college and announces, “Two hundred and fourteen,” Gilly’s thought is “Give or take a few dozen.”

As dog and human gradually become a close partnership, Gilly relates and reflects on their journey.

By the end of the book, readers will look at the world in a whole new way – after seeing it through Gilly’s eyes.

“Through Gilly’s Eyes: Memoirs of a Guide Dog” is available on www.amazon.com as a Kindle download or on the author’s website, www.guidingforlife.com ($14.95 print; $7.99 Kindle).

By mirrormmg March 13, 2013
in Life and Arts
Related Posts