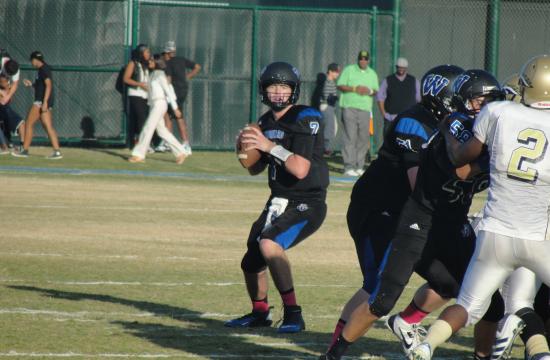 Los Angeles-Windward defensive back Drew Bryant picked off two passes for interceptions against Kilpatrick. Bryant’s 62-yard interception return for a touchdown with five seconds remaining before halftime was the play that put the dagger in any chance that Kilpatrick might have had in defeating the home team.

As it was, Bryant’s pick six heading into intermission gave Windward a comfortable 26-14 lead. The Wildcats used that momentum to cash in on a 47-22 win against Kilpatrick at Windward.

After going down in defeat for the first time this season last week, Windward improves its record to 5-1. With time winding down on the second quarter, Bryant took the ball that bounced off a Kilpatrick receiver’s hand and raced to the endzone untouched to give Windward an insurmountable lead that Kilpatrick couldn’t recover from.

The Mustangs dropped to 3-4 on the season with the loss. Windward came out and scored 14 points in the first quarter. The Wildcats then added another 12 points in the second period to take a 12-lead going into the locker room.

Still, Windward coach Alvin Cowan said he thought Kilpatrick came out and gave his team more than it could handle in the first half.

“They came out and punched us in the mouth,” Cowan said. “I didn’t feel like we were playing at our level of football. We couldn’t run the football. They’re a good team. They’re well-coached and they have a great offense.”

With that said, Cowan have a pretty decent offense himself. Quarterback Connor Simpson completed 11 of 19 passes for 165 yards on the afternoon, including tossing touchdown passes of 50 and 37 yards. The Wildcats only totaled 280 yards on offense for the day.

However, the play of Windward’s defense and special teams’ units gave the Wildcats some extra help. Besides Bryant’s electrifying interception return in the first half, wide receiver Austin Webster contributed with a 64-yard punt return for a score to go along with a couple of pass receiving touchdowns he had.

Webster also had an interception return for a touchdown called back because of a penalty. Defensively, the Wildcats did a lot of bending but didn’t break. The Windward defense allowed Kilpatrick to make some big plays during the game.

But its defense, led by Bryant, who recorded 11 total tackles and returned a fumble for a 25-yard score, made some big plays of its own. The Wildcats registered six interceptions for the game.

After N’Gai Wyatt hauled in a long touchdown pass in the third quarter to bring Kilpatrick within striking distance of the Wildcats, Windward put up 21 second half points to run away to its fifth win of the season. Webster’s long punt return for a touchdown and a horde of interceptions by Windward’s secondary closed out any hopes Kilpatrick had of coming back.

Besides Bryant and Webster, Noah Kingsdale, Riley Jameson and Kyle Brisacher recorded interceptions for Windward. Windward take on Marshall next week in an Alpha-East League matchup in Pasadena.