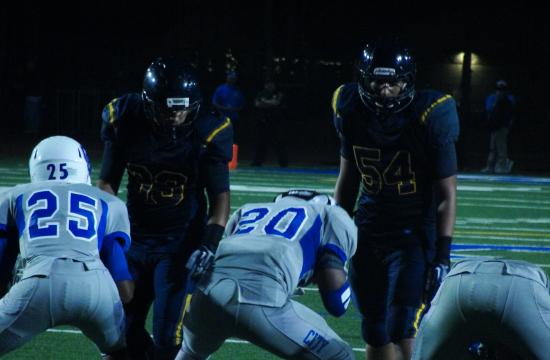 The Santa Monica High School football team had an opportunity to close the deal on the Ocean League title by defeating Culver City on the road Friday night. The Vikings would have controlled their own destiny should they have came away with their third win in Ocean League play this season.

However, that didn’t happen. Santa Monica now has to watch and see what Culver City does for the remainder of the regular season to see if they will still have an outside shot to tie for the league crown at best.

Samohi fell behind early, rallied late, but ultimately lost to Culver City 17-14 in overtime. The Vikings fell down 14-0 at halftime. But in the second half it was a different story. Led by the inspired rushing attack of running back Kwame Duggins, the Samohi squad fought back to tie the ballgame with just over 10 minutes remaining in the fourth quarter.

The game would remain knotted up in regulation, forcing the overtime scenario. Samohi got the ball first but couldn’t do anything with their opportunity. Instead of pounding the ball inside to Duggins, Santa Monica coach Travis Clark went to the passing game a couple of times with junior quarterback Nico Basile.

That effort came up short as Basile just missed on a couple of throws that could have given Samohi the lead in the extended period. The Vikings also missed a field goal opportunity after that sequence of plays.

That left Samohi’s defense with a tall order to shut down the Centaurs and their playmaking quarterback Armani Rodgers.

For the last two quarters, the Vikings’ defense were able to do that, bottling up Rodgers with a ferocious pass rush and outstanding play on the perimeter and locking up the Centaurs’ outside weapons. Overtime would prove to be a much different barometer with both teams getting the ball at the 25-yard line to score.

Samohi couldn’t make it happen when the Vikings had their chance. Rodgers and Culver City made the best of their opportunity. The Centaurs took the ball from the 25-yard line and drove it to the 2-yard line to set up the game-winning, 21-yard field goal by kicker Nico Melendez.

That was the ballgame. A slow start in the first half cost Samohi a golden opportunity to all but lock up the Ocean League with a victory over their league rivals. On this night, however, it wasn’t meant to be.

After tying the game early in the fourth quarter, Samohi’s offense stalled and went nowhere on its last three possessions in the period. Clark thought his team played a much better game in the second half than the effort they gave out through the first two quarters.

As far as the loss, Clark said the team can’t dwell on it.