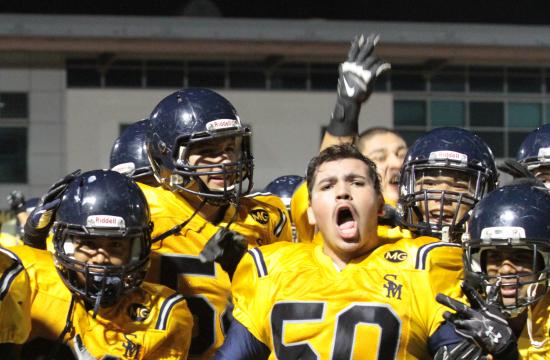 The Santa Monica High School Vikings football team is back on the right track. A week after a disheartening, overtime defeat to Culver City, the Samohi team kept themselves in the hunt for a good postseason seed with a 21-0 shutout win Friday night against Inglewood.

A week earlier, Samohi stumbled and struggled to move the ball with consistency on offense, falling behind the Culver City Centaurs by two touchdowns at halftime. The Vikings, despite rallying back to tie the game, lost in overtime to a field goal after failing to convert on their initial possession in the extra period.

Two touchdowns by running back Kwame Duggins gave the Vikings the only offensive life they had as a team. The contest against Inglewood didn’t require such theatrics. The defeat to Culver City cost Samohi a chance to be in the driver’s seat to claim the Ocean League title.

The focus now is for the Vikings to hold to their second place in the league to hold fast to a good see in the postseason.

As it stands right now, Samohi is ranked seventh, according to Maxpreps, in the CIF Southern Section Western Division (IV) rankings.

With a regular season finale against Hawthorne on Friday night, the Vikings can finish the season on a strong note. Playing at Corsair Field at Santa Monica College, Samohi did just that as head coach went out and defeated his former school.

The first line of credit in the Viking’s victory goes to the team’s defense. In producing its second shutout of the season, Samohi held Inglewood quarterback Andrea Zaire to just 67 yards passing. Samohi limited the senior signal-caller to a six of 20 completion passing performance on the night.

Even better than that, the Vikings also muzzled Inglewood’s running game, holding the Sentinels to just 23 yards on the ground.

With this week being the last regular season game to be played, Samohi seems to be on a roll, playing with the necessary momentum heading into the playoffs. The Vikings have won three of their last four games going into the season’s conclusion against Hawthorne, which should give Samohi confidence in the postseason.

Samohi got on the scoreboard in the first quarter. The Vikings then added touchdowns in the third and fourth quarters to wrap up their fifth win of the season.