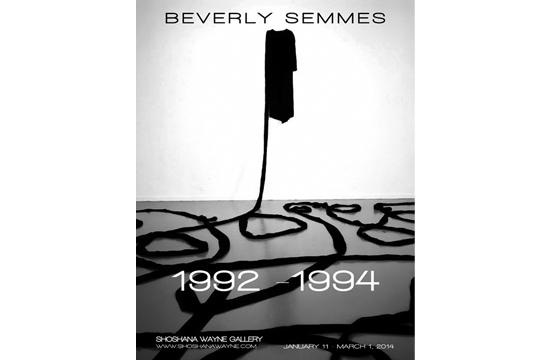 Shoshana Wayne Gallery today opens a new exhibit: Beverly Semmes’ “1992-1994.” This is Semmes’ third solo exhibition with the gallery, which will run through March 1.

“1992-1994” focuses solely on two of Semmes’ iconic sculptural dress works from the early 1990’s: “Buried Treasure” and “Shadows,” both of which have been exhibited widely in museums and gallery spaces internationally.

These artworks solidified the artist’s importance within the repertoire of both feminist and contemporary art.

The main gallery features “Buried Treasure” (1994), a lush black velvet dress with a single long sleeve that extends from the wall onto the gallery floor in linear ribbons of crushed black velvet that twist and turn around the space to create an abstract map.

This labyrinth circles back on itself like a trail with no clear endpoint in a work that is both landscape and body; the figure becomes the space that contains it.

The dramatic sleeve/drawing demands an alternate consideration of space guided by Semmes’ hand.

“Buried Treasure” challenges conventional functions of architectural space by simultaneously drawing viewers in and pushing them back – constraining them to the perimeter of the work and thus, to specific vantage points within the gallery space.

The work also evokes a theatrical dimension through the richness of its fabric, dramatic scale, and constrained visual point of view.

Accompanying “Buried Treasure” is a landscape photograph depicting a potentially ominous figure in the black dress with a red “X” prominently marking his/her back.

In the right corner of the photograph there is a glimpse of the American flag.

The juxtaposition of the dark sculptural figure with that immediately recognizable symbol of patriotism is disconcerting.

The presence of this photograph revealing the “back side” of the same dress that hangs on the wall exemplifies the artist’s strong interest in performance, mastery of craft, social critique, and installation as architectural intervention.

“Shadows,” a sextuplet of pink organza dresses, with a quieter intensity provides a tactile contrast in the smaller gallery.

Where “Buried Treasure” is made with a rich and light absorbing crushed velvet, Shadows is decidedly weightless and buoyant – a whisper of a work that measures 20 feet in length.

While Semmes’ use of a decidedly more delicate fabric provides a counterpoint to “Buried Treasure,” it engages the viewer in a similar manner.

The balance between the opaque and the transparent, the dramatic and the whimsical, conveys a complex sense of material presence.

Semmes was born in Washington, D.C. and lives and works in New York City.

She has been exhibiting her work since 1990 and has had numerous solo gallery exhibitions as well as museum exhibitions and installations at the Hirshhorn Museum and Sculpture Garden in Washington D.C., the Neuberger Museum of Art in New York, the Institute of Contemporary Art in Philadelphia, the Camden Arts Center in London, and the Pecci Museum in Prato, Italy.